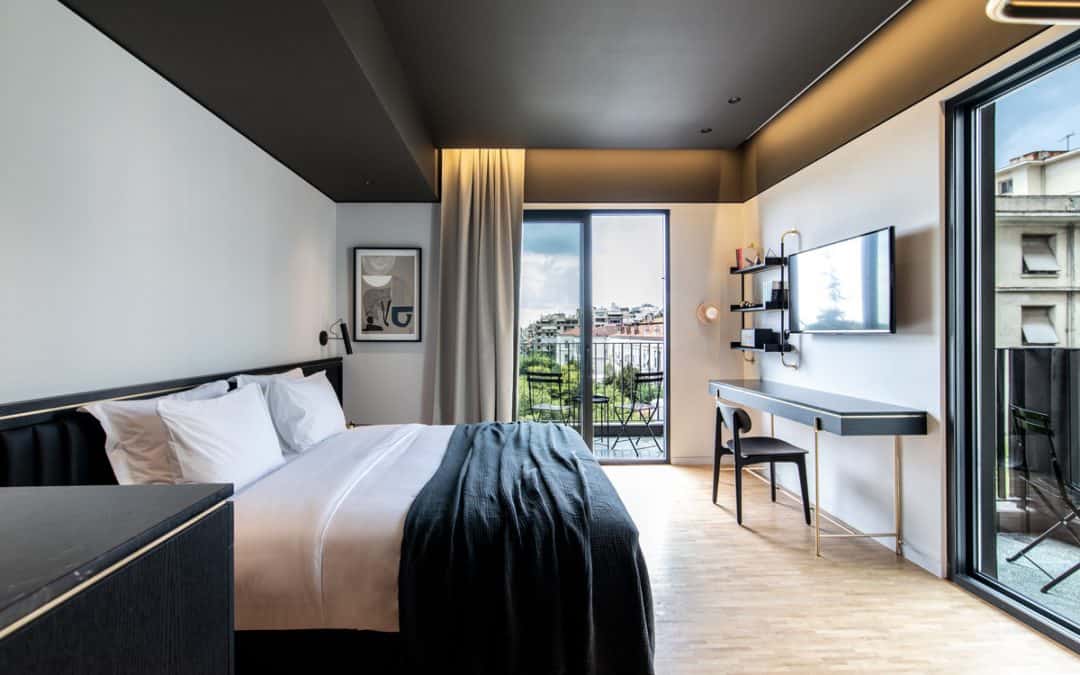 Choosing where to stay in Athens can be quite overwhelming. There is a lot of excellent accommodation and at reasonable prices too compared to many other European capitals.

Luckily Athens is relatively flat, has good public transport and almost all sites and attractions are within walking distance from each other. It can be very hot in summer but there are many fantastic rooftop bars and, of course, the best places also have Acropolis views. Where you stay will possibly get down to your budget and availability but wherever you end up it’s likely to be a pretty good location. 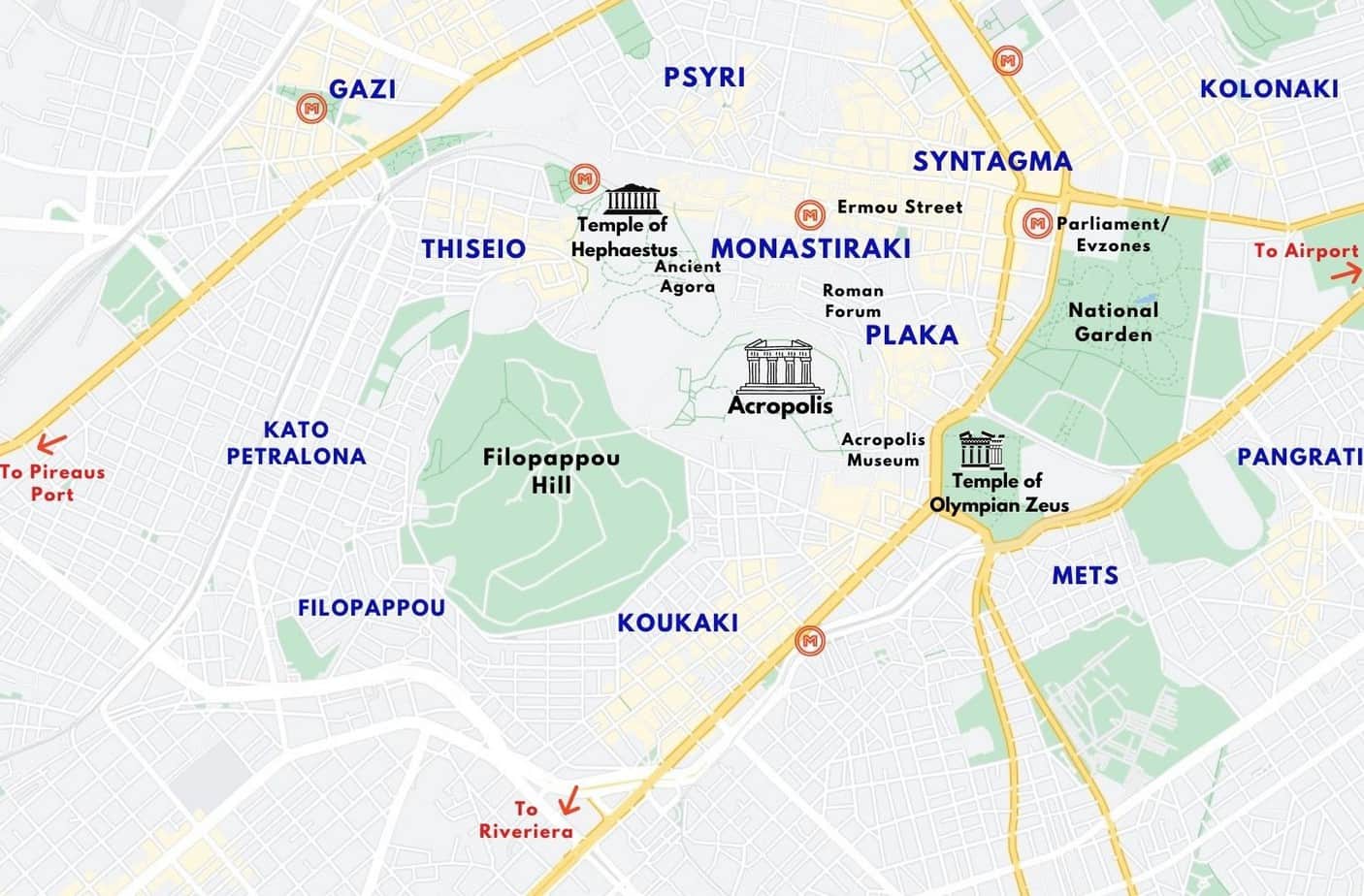 Athens is a large sprawling metropolis of almost 4 million people across 7 main districts and one of the oldest cities in the world.

Unsurprisingly the Historic Centre is centred around The Acropolis which rises up in the middle of the city in all its glory.

Visitors can stay comfortably at any of the neighbourhoods that surround The Acropolis as these areas are relatively flat, close together and easy to explore on foot.

The neighbourhoods to the North are the most popular as they are also very close to many of the other ancient sites and Athens attractions. It takes 20 minutes to walk to the Acropolis from Kolonaki, Psyri or Gazi and 10-15 for most of the others on this map.

Up and coming – Thiseio, Koukaki and Mets

Things to do in Athens

Once the nightlife district nowadays it’s the main tourist area home to as many tourists as locals.

There are a lot of souvenir and gift shops, cafes, taverna and other things of interest to tourists but it’s also quite a lovely leafy area with brightly coloured, and much photographed, houses and lots of bougainvilleas.

It’s also central to almost everything so it’s easy to see why it is so popular.

Top Things to do in Plaka

Where to stay in Plaka

Recommended Luxury Hotel: AthensWas Hotel and A77 Suites by Andronis

Auntie’s Home in Plaka is a fantastic 2 bedroom/2 bathroom apartment with a huge terrace and amazing Acropolis views too. It’s incredibly well priced too. Acro & Polis is another excellent property and it can sleep 6 across 2 bedrooms.

For big groups Dionysus is a beautiful apartment right in the middle of Plaka. It has 3 bedrooms and can sleep 9 and it’s a great price too given the quality (one thing to note however is that it is not airconditioned). Athenian Niche is a stunning neo-classical villa in the heart of Plaka with 4 bedrooms that can sleep up to 10 people in 4 bedrooms and it has 3 bathrooms too. 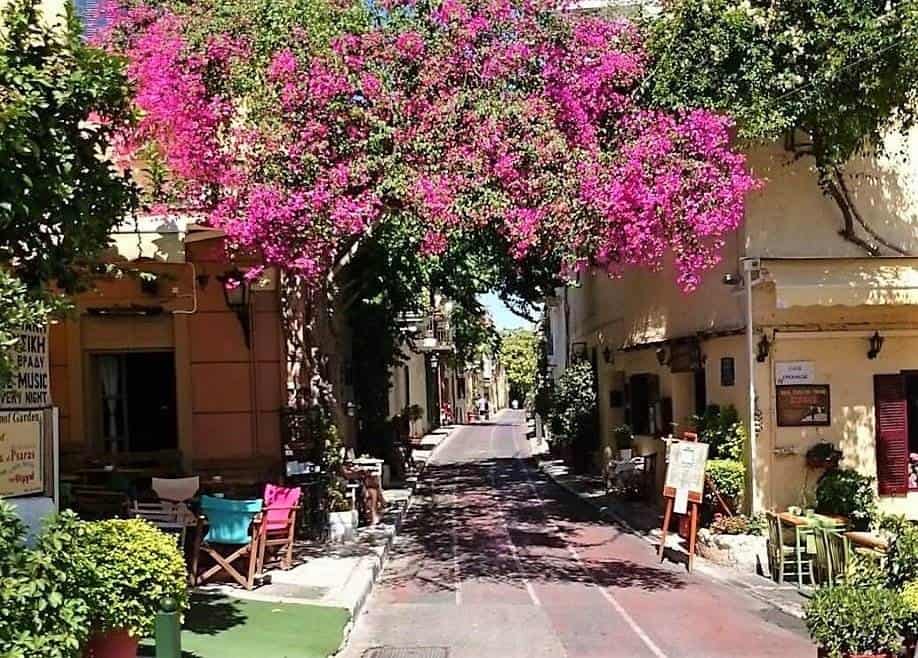 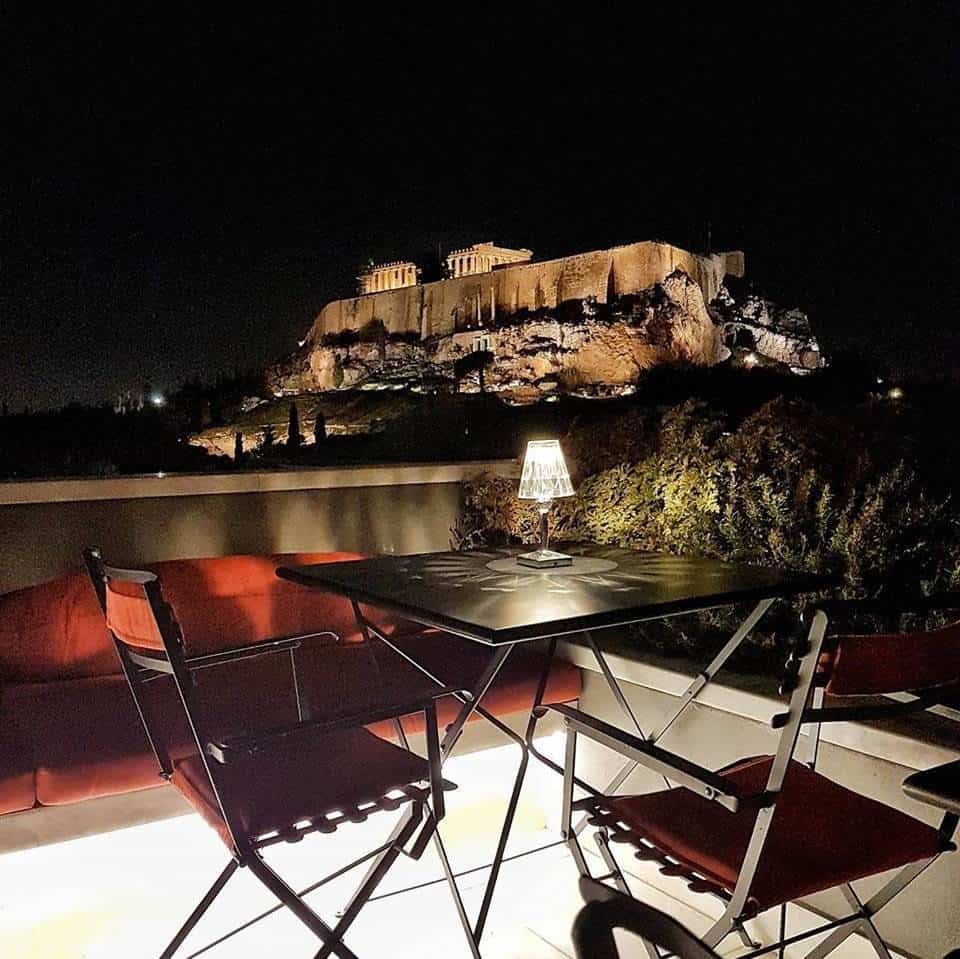 Athens’ central square, Syntagma is the centre of modern-day Athens, used as a meeting place for friends, and a place for Athenians to voice their displeasure at the government through protests and political gatherings.

It is home to the Presidential Palace and a number of other Government buildings.

Ultra-convenient, with a Metro station under the Square, Syntagma has lots of hotels to choose from and is reachable on foot from most tourist attractions around Athens.

Things to do in and around Syntagma

Where to stay in Syntagma

Recommended Luxury hotel: Hotel Grande Bretagne ( the most famous hotel in all of Greece) or King George, a Luxury Collection Hotel 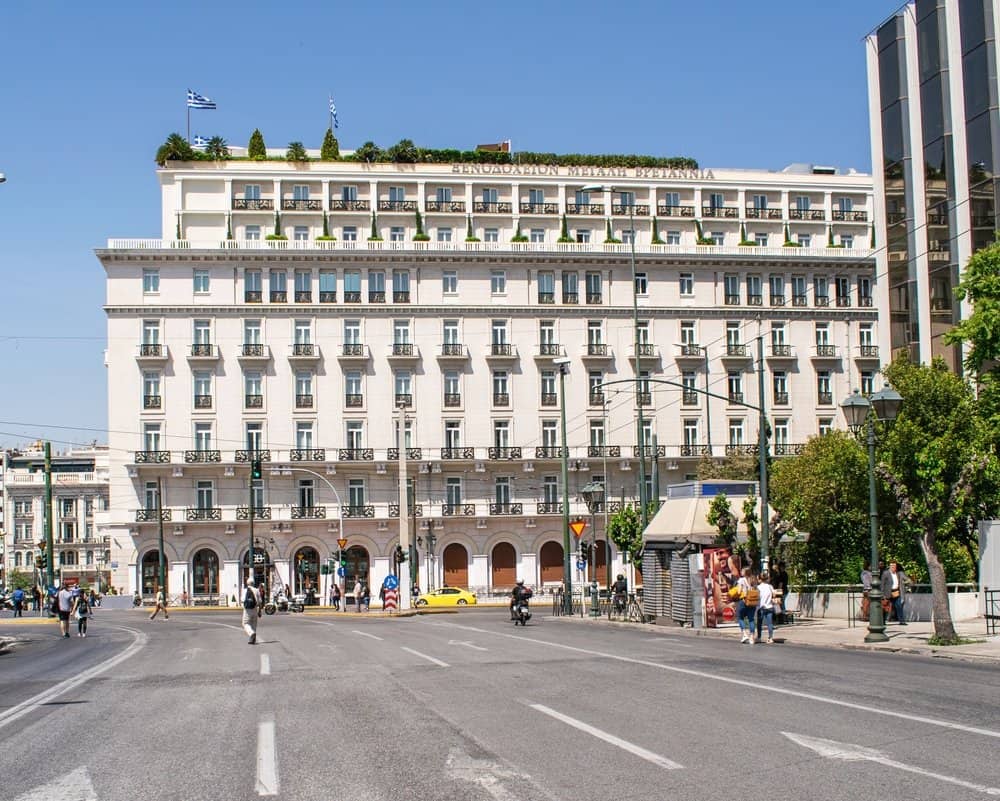 Monastiraki consists of central Monastiraki Square and the streets around it and is a very popular and well known central part of Athens. Bordered by Ermou street and wedged in between Plaka, Syntagma and Psiri it is a popular tourist destination.

There is a street full of tavernas and cafes called Mitropeleos and we have rented both self-contained apartments and stayed at boutique hotels along there. It is smack bang in the centre of everything.

Things to do in Monastiraki

Where to stay in Monastiraki 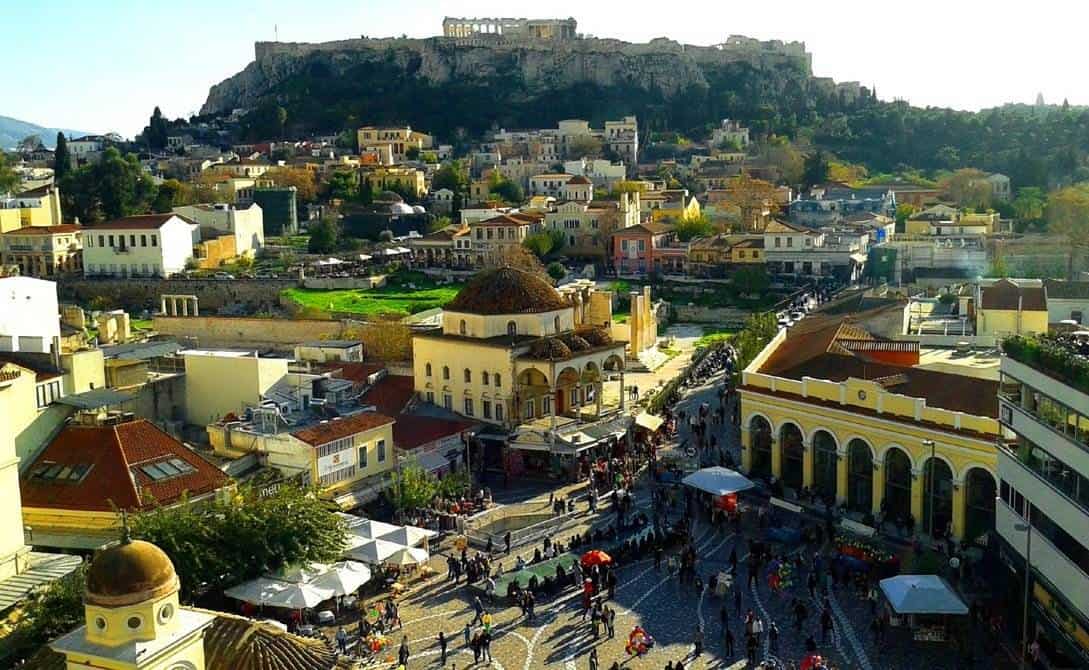 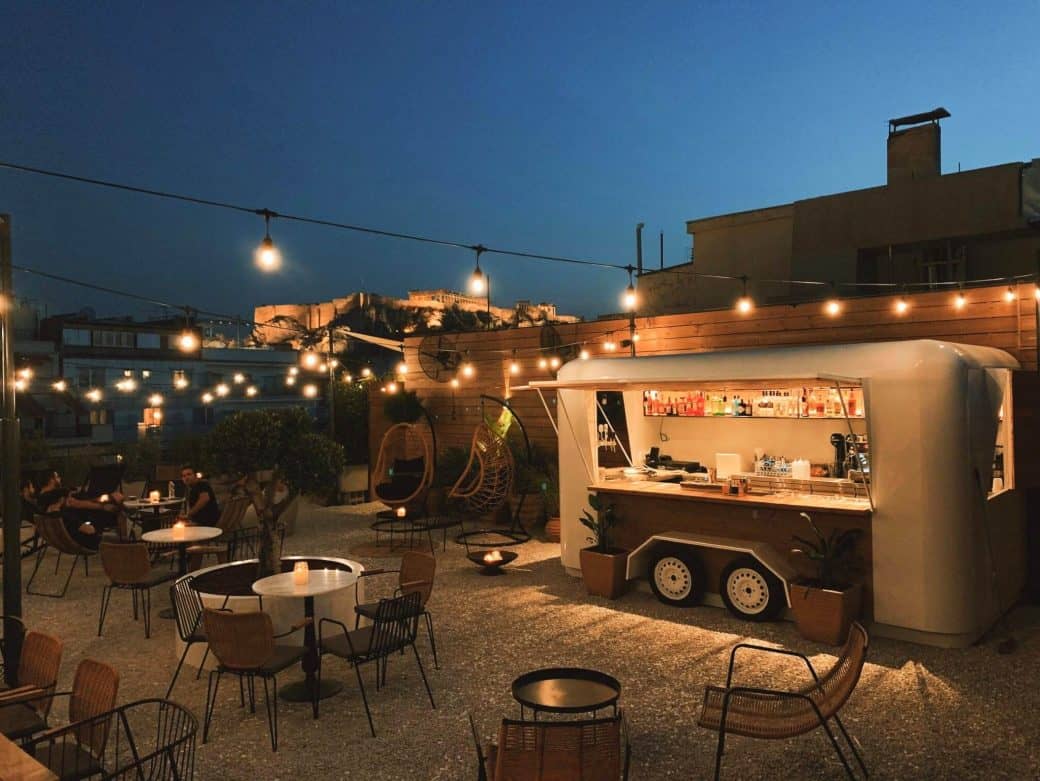 Psiri is the cool, grungy area of inner Athens that has always been popular with activists and alternatives. It has some very good cheap and cheerful tavernas and cafes and can get quite lively at night. It is also home to some of the best street art in the world.

Whether you want a hipster cocktail bar or an all-night rave, you’re bound to find it in here.

Things to do in Psyri

Where to stay in Psiri

Recommended mid/luxury hotel: The Foundry, A for Athens or Pame House

Best self-contained apartments for groups: A.P. Acropolis view have a 2-bedroom family room with its own Hammam or  Central Apartments. 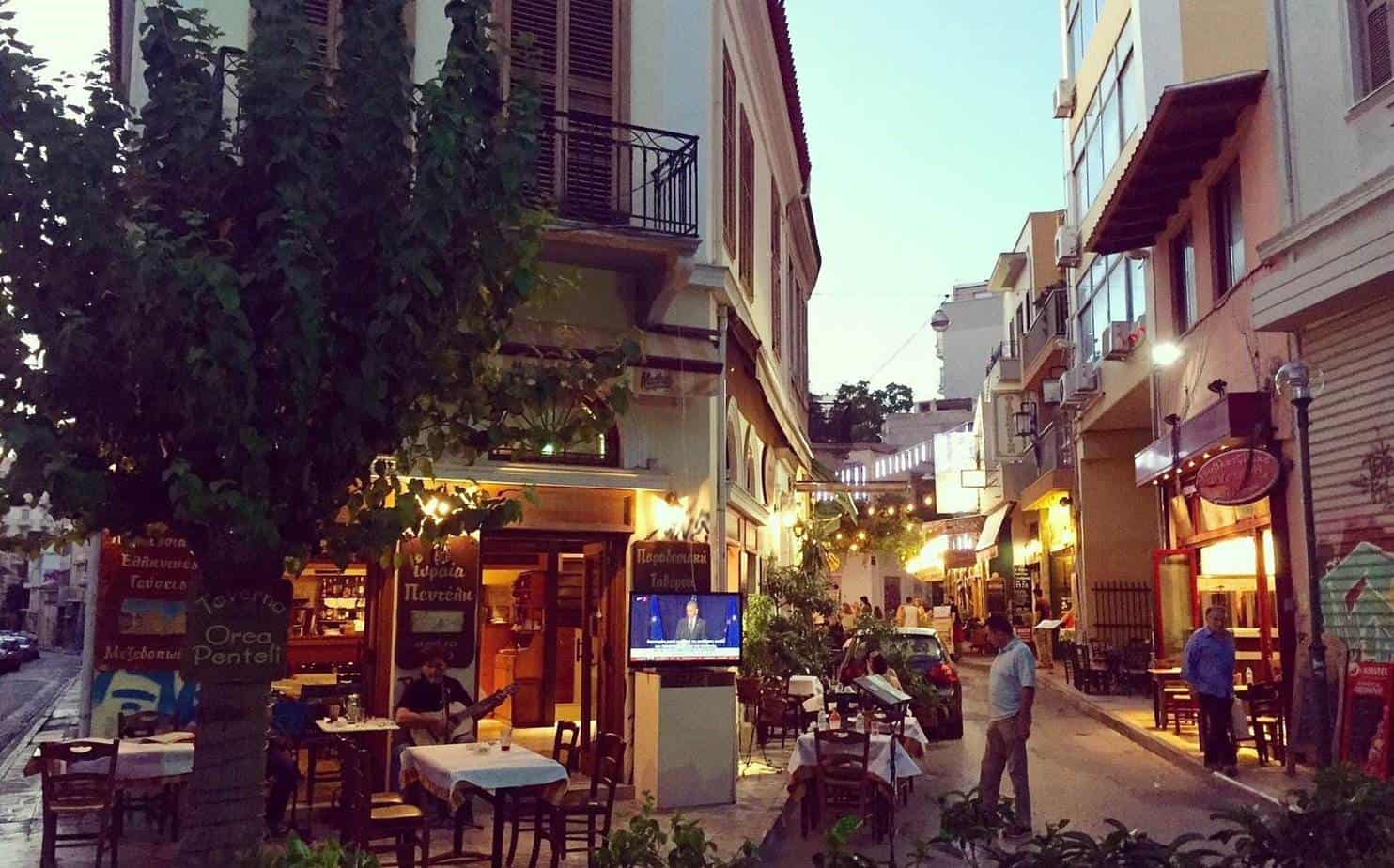 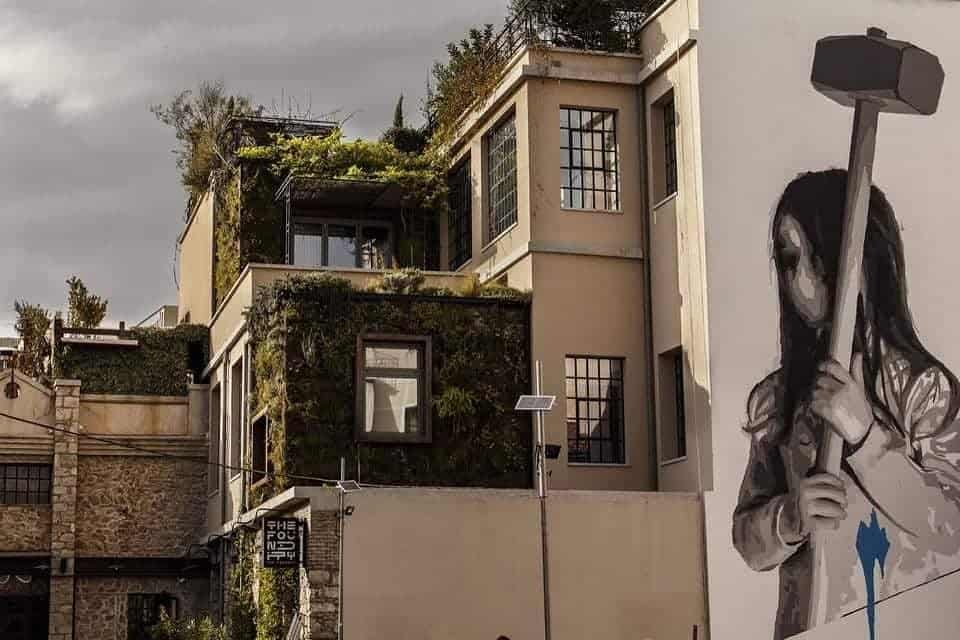 Kolonaki is the posh area of central Athens. Filled with designer shops, Kolonaki is a ritzy neighbourhood at the foot of Lykavittos Hill the south and southeast slopes of Lykavettos Hill north of Vassilisis Sofias Avenue.

It is filled with a mixture of old neoclassical houses, upscale modern flats, art galleries, shops, cafes, and restaurants.

Traditionally the home of the in-town rich, it’s also the location of a number of foreign embassies and several prominent archaeological schools, including The American School and The British School where a lot of foreign diplomats send their children.

Things to do in Kolonaki

Where to stay in Kolonaki 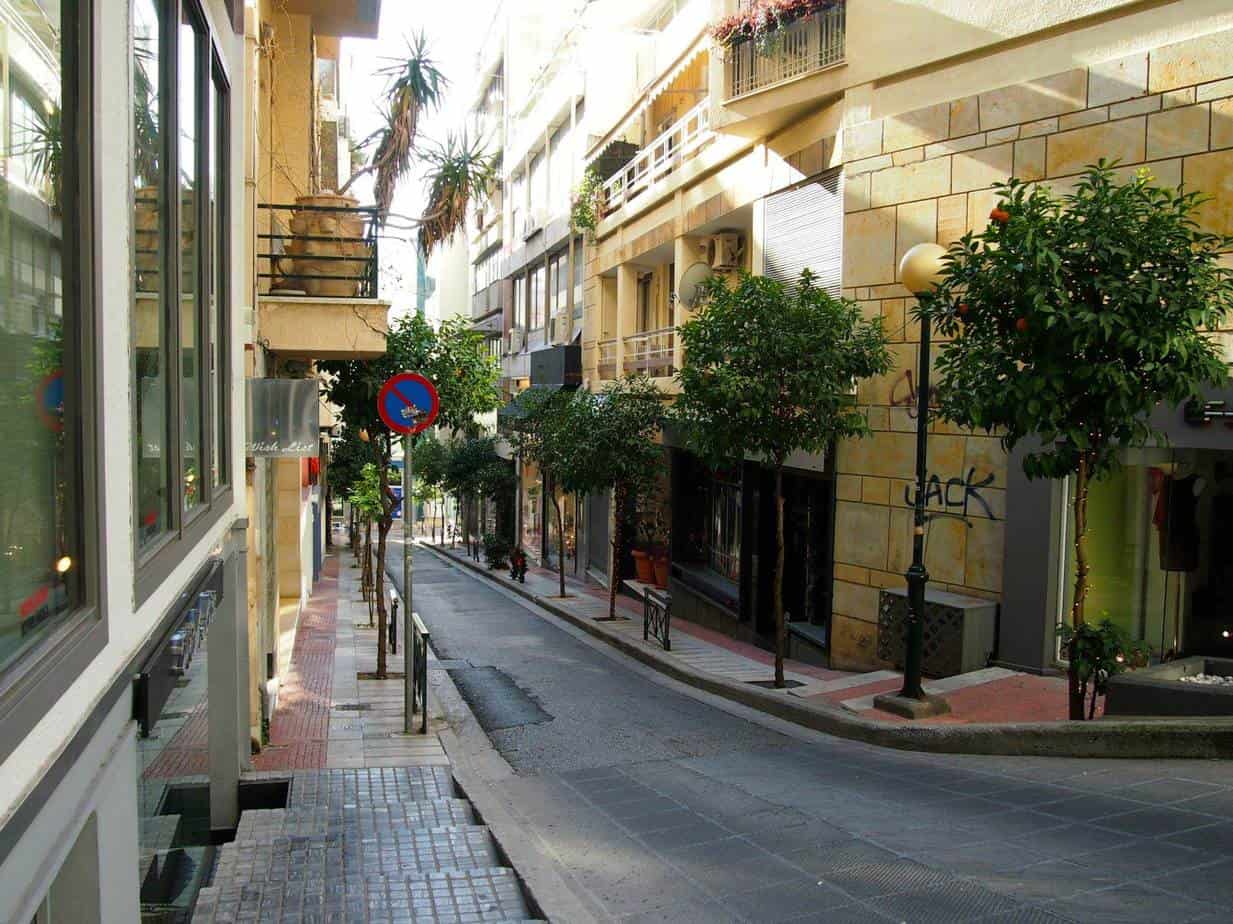 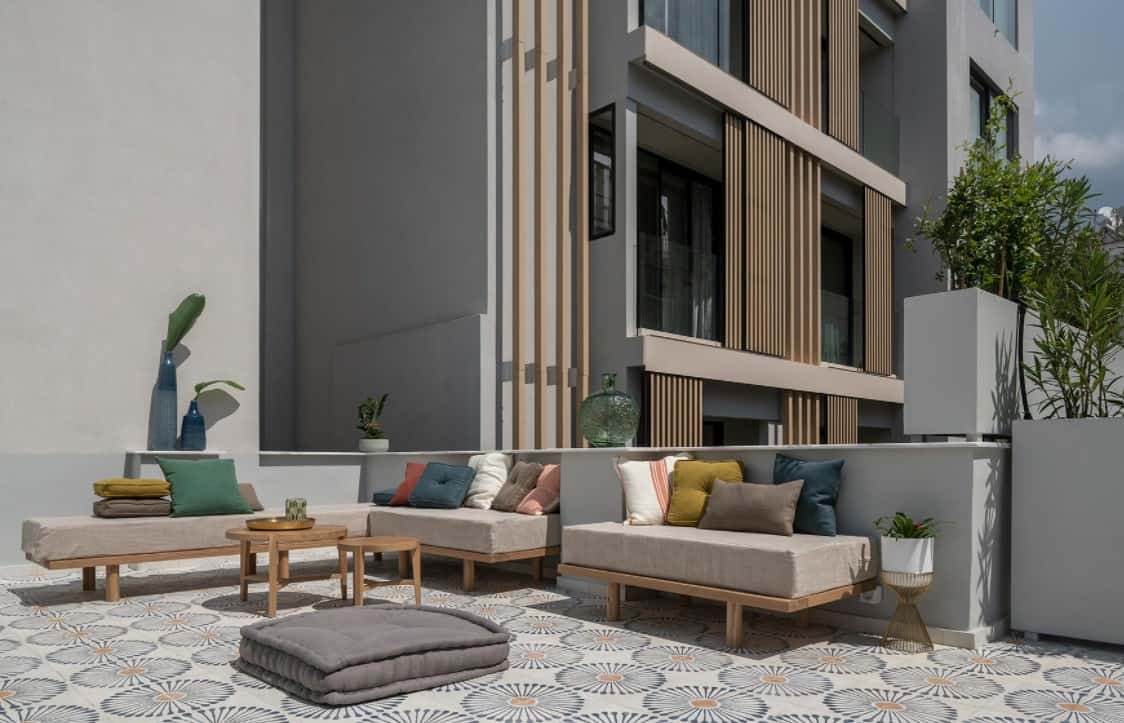 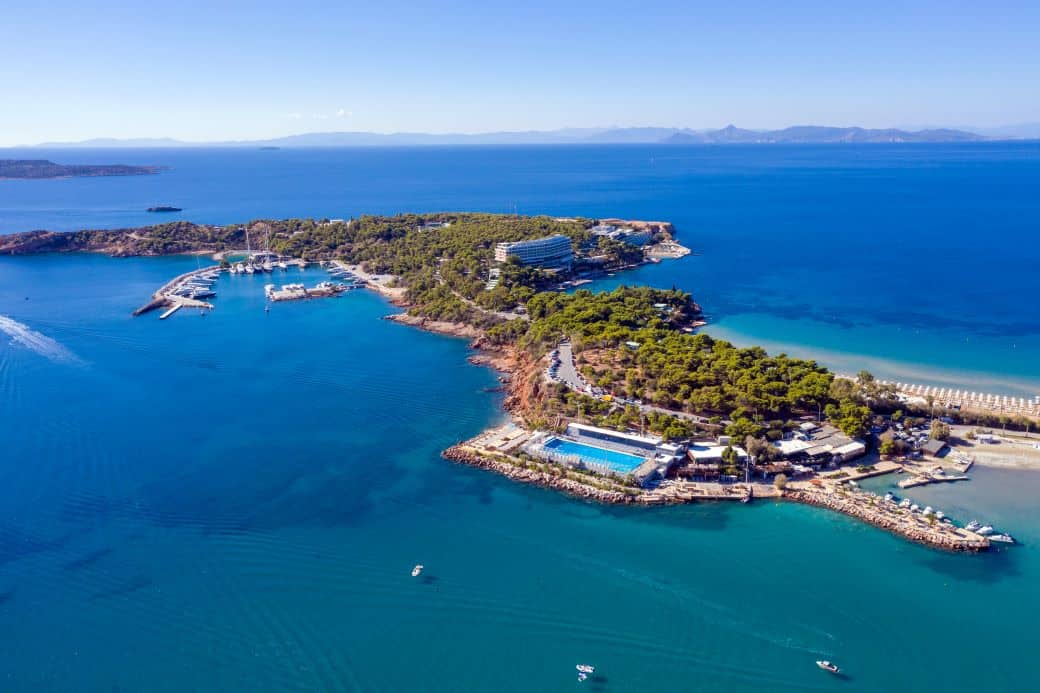 The southeast coast of Athens, and the southern suburbs that dot the coast, are a great option in the summer months if you’re interested in some beach time.

A lot of people, especially Greeks, love to stay in centrally located Glyfada. We preferred Vouliagmeni which seemed more leafy and relaxed but with fewer dining and shopping options.

If you’re a golfer then Glyfada also has the only golf course in Athens! There is a tram line in Glyfada with connections to Neos Kosmos metro station and Sygrou Fix Metro station (line 2), but note the tram is pretty slow going.

The “downtown” of Voula has more going on in terms of restaurants and cafés, and Vouliagmeni is the more remote of the two. You will need to catch a taxi or a metro from Gylfada and a taxi from there, which should be less than 10 euro.

We love Divani Apollon Palace, especially for families and The Margi is great for couples and singles.

Astir – at the very end of this stretch of Coastline is a small peninsula often referred to as Astir.

There are also a number of exclusive bars and restaurants including an exclusive beach club and Marina. This area is very popular with celebrities and VIPs.

Where to stay on the Athenian Riviera

Things to do on the Athenian Riviera

The beach and beach bars and clubs are the main focus of this part of Athens of course but there are also a number of fascinating sites to visit and activities to do.

Vouliagmeni is actually home to a thermal lake which is believed to be very therapeutic. The lake is located just a short walk back from the beach and is open to the public for swimming and snorkelling. There is also a nice café on-site and a range of spa treatments and activities.

Cape Sounion is the other big attraction. This is where the incredible Temple of Poseidon stands overlooking the sea. It was built to fortify Athens against invading forces and to honour the God of the Sea. It also played a significant role in Greek Mythology and Homer’s The Odyssey.

It is also popular to visit the Athenian Riviera and surrounds as a Day Trip. You can include a visit to the Temple of Poseidon at Cape Sounion as well.

Alternatively, a sunset sailing cruise is a truly unforgettable evening. 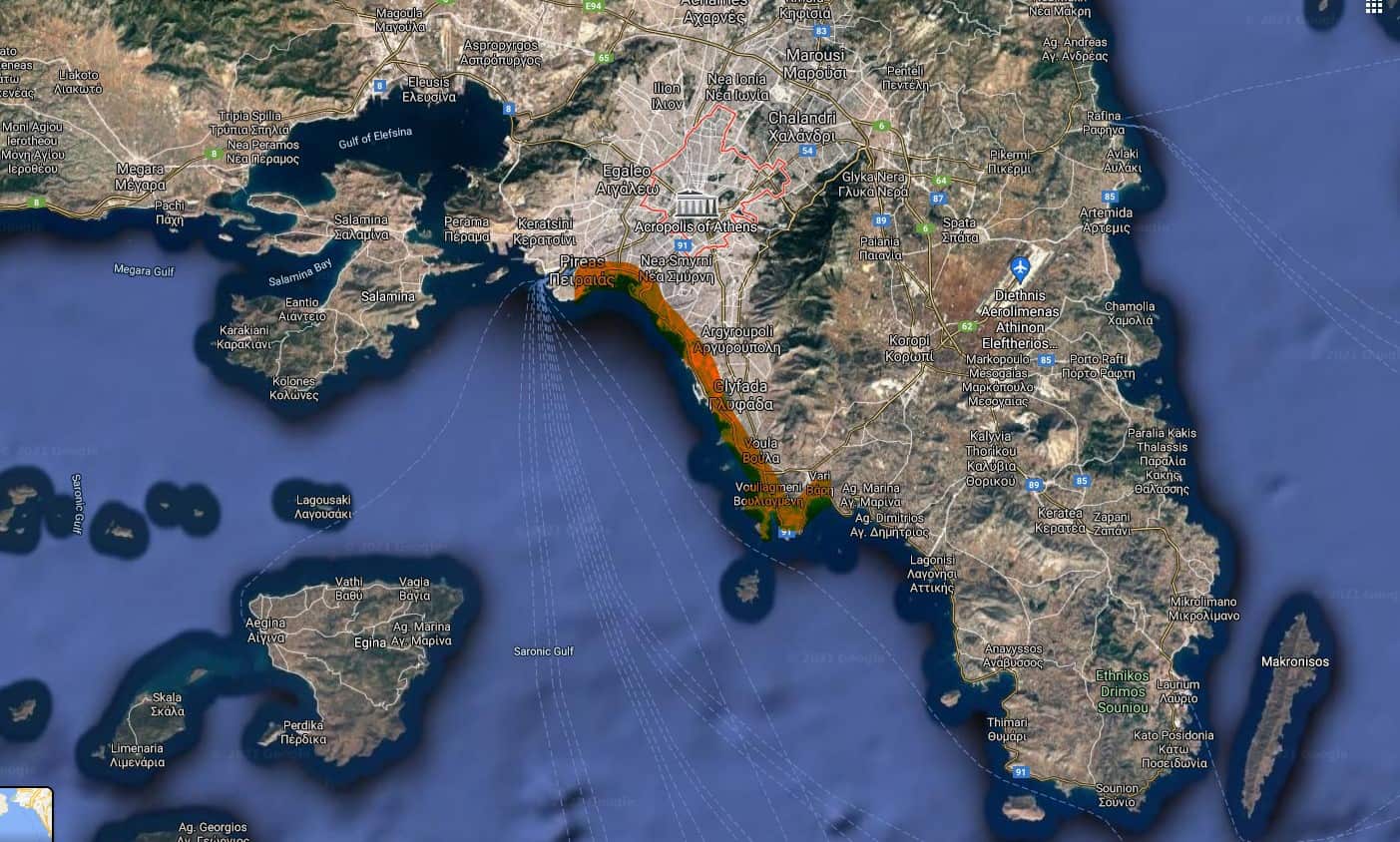 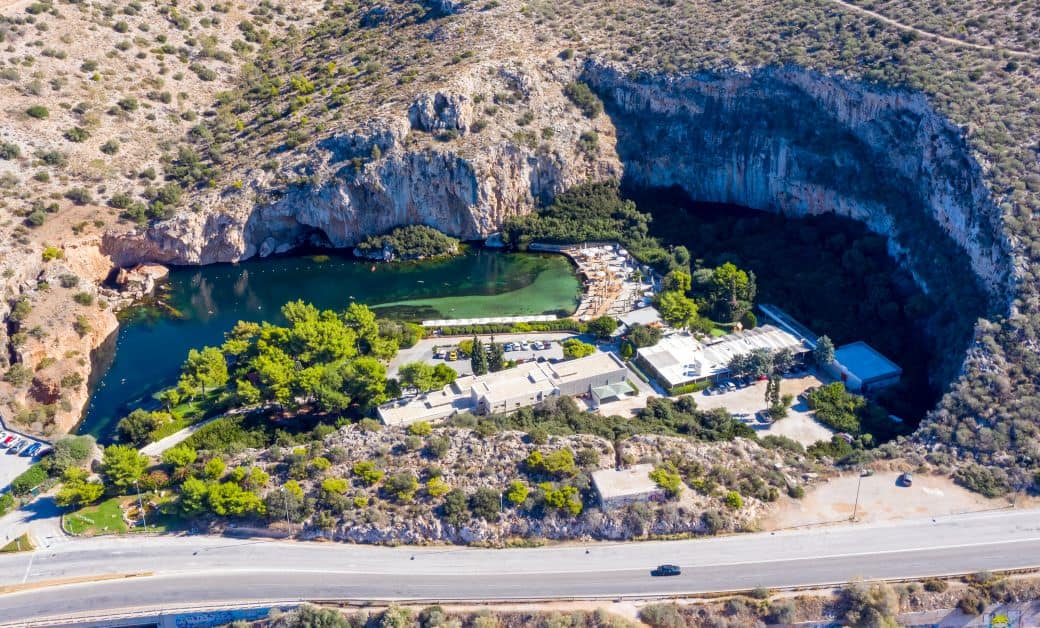 There are not a lot of choices when it comes to hotels near Athens airport. Many people either choose to stay in the city centre or do the following;

If you have an early ferry or cruise ship to catch or even arrive late at night you may not want to venture into the city centre.

Like most big ports Piraeus is not the most exciting nor attractive place to be. In fact, Piraeus is a city of almost 200,000 people that merged with greater Athens decades ago and is home to not only the largest passenger port in Europe but also one of the largest Universities in the country, and some important leisure and sporting facilities.

The streets surrounding the port are largely full of shipping type businesses and cargo services, the Port Authority, numerous small cafes and travel agents and a couple of large shopping malls and the Metro Station.

There are a couple of decent hotels such as Achillion Hotel Piraeus and Faros l. The best choice in our opinion is the brand new Port Square Hotel which opened in 2022 and is right across from the Main ferry gate.

Just a few blocks back from Piraeu as well, is one of Athens best-kept secrets, the small port of Pasalimani.

This pretty port is almost a complete circle with a small entrance from the sea, past a modern spit and into the Marina. The bay is lined with tavernas, cafes and bars and is a lively place at night with locals. There is even an organised beach with sunbeds to the east.

Our favourite place to stay near Piraeus is the gorgeous The Alex Hotel which is a short walk from Pasalimani and a $10 taxi fare to Piraeus. This modern hotel is very new, very stylish and has panoramic views over the bay the the islands, especially from the rooftop bar. 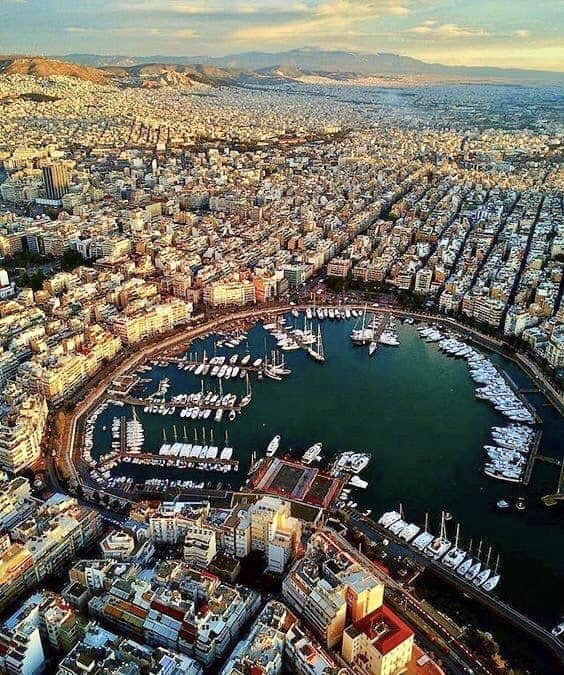 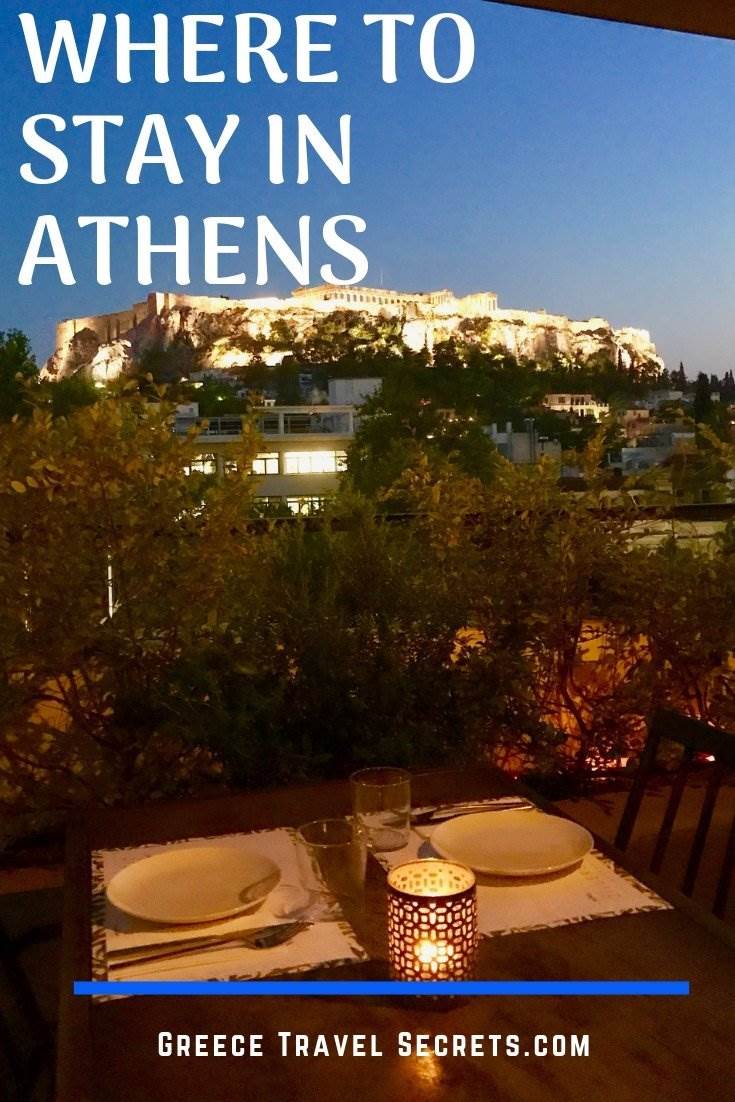 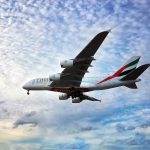 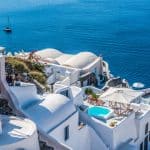 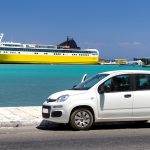 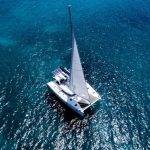 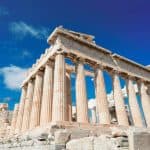 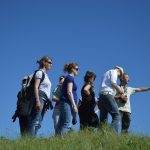 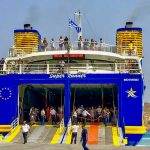 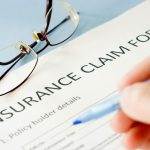