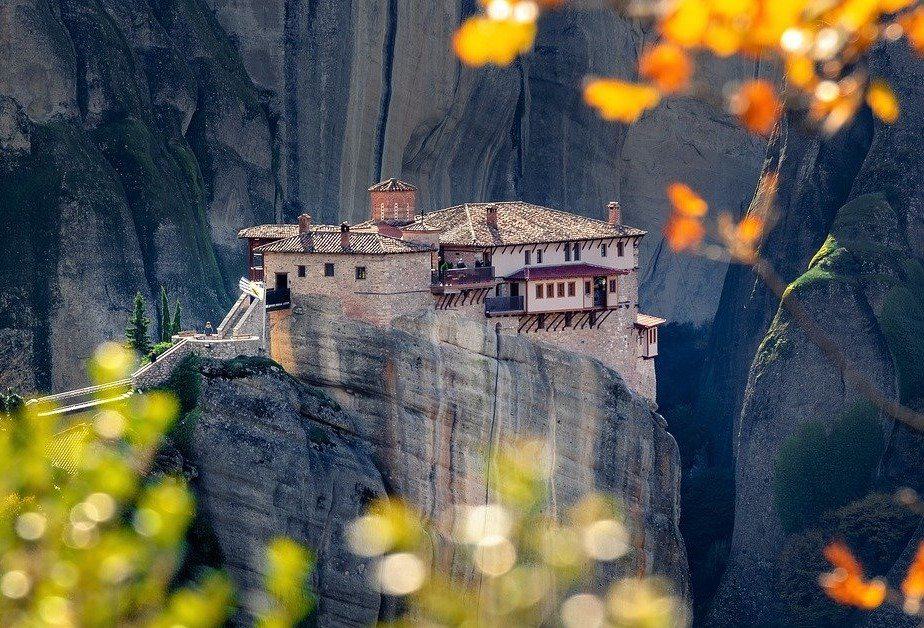 There’s no better way to enjoy a virtual holiday and to imerse yourself in the culture and landscapes than by watching television shows or movies shot in Greece.

Seeing the magnificent scenery, the sparkling blue sea, and the whitewashed buildings and cobblestone streets will transport you right to Greek soil, whether it is via a thrilling car chase, a romantic interlude or a fantastical mountain journey on horseback. As far back as the 1950’s movies shot in Greece have received praise and accolades and, as you will see in the reviews of these films, consistently excellent reviews too! 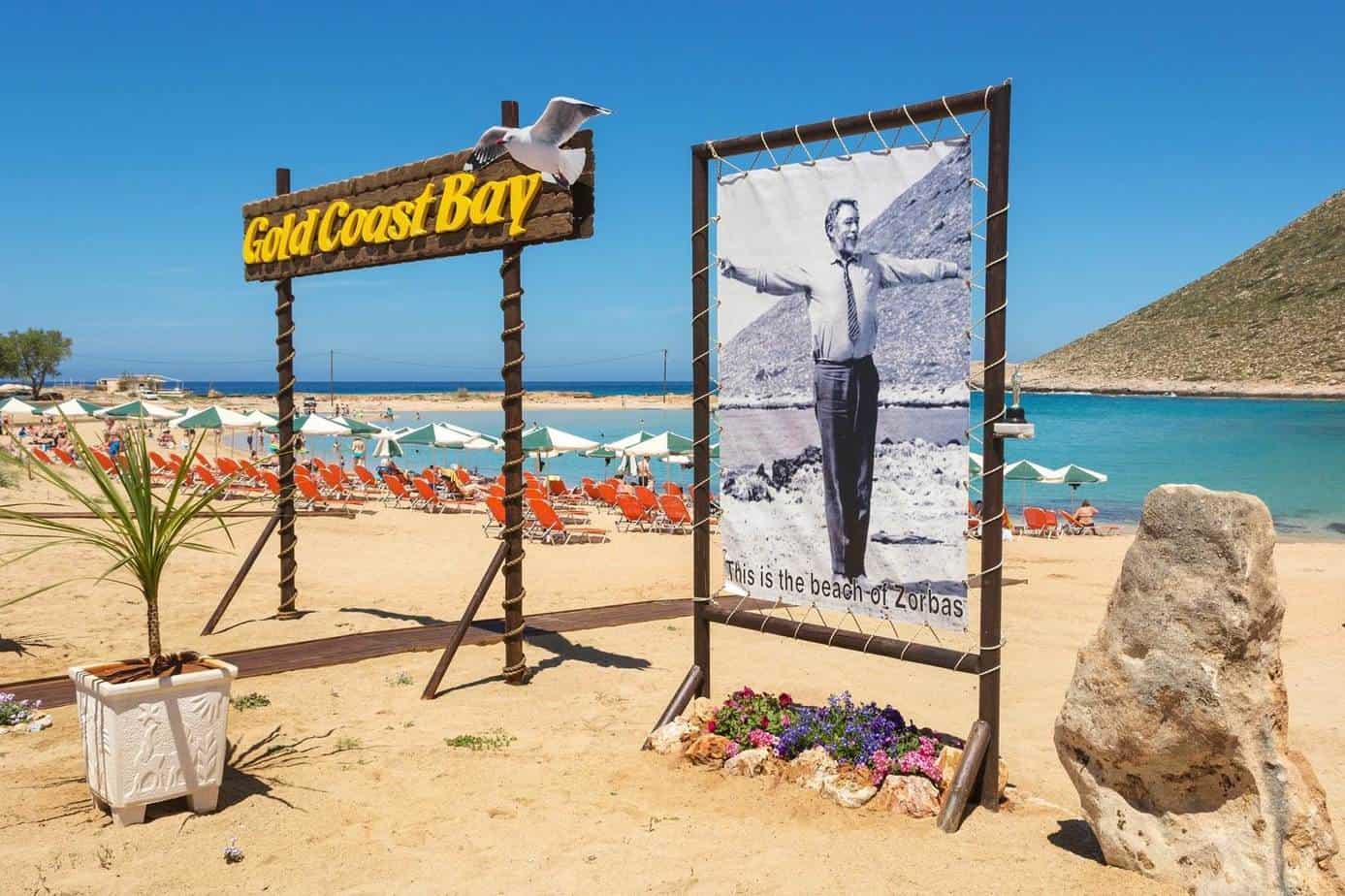 Possibly the most famous Greek movie of all as it also made famous the song and dance of the same name.

The story is about an English writer who arrives in Crete to inspect his father’s abandoned mine ( you can still see where this was shot in Stavros Bay). He strikes up a friendship with a local hotel owner Zorba, which changes both mens lives forever.

Crete is the largest of all the Greek Islands and the 5th largest island in the Mediterranean. It offers so much to visitors – from stunning world class beaches, to magnificant Gorges and hiking paths, through to Ancient History and Archeology. The food culture of Crete is also significant with numerous farm-to plate experience, food tours and excellent wineries to visit as well.

Further reading: Things to do in Crete 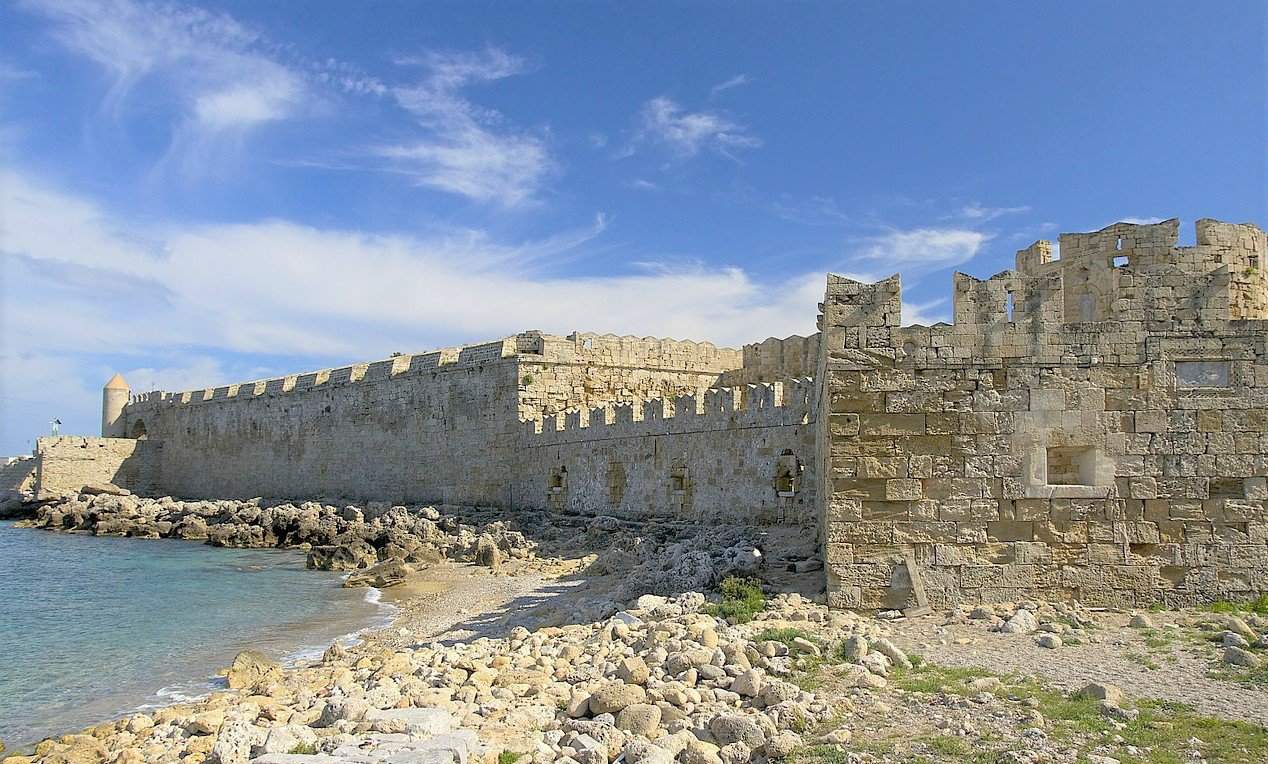 Nominated for multiple Oscars at the time and winner of Best Special Effects this 1961 film starred Gregory Peck, David Niven and Anthony Quinn as a team of Allied military specialists sent to infiltrate a Nazi-occupied fortress in Greece, and rescue 2000 trapped British soldiers.

Although the island of Navarone does not actually exist the movie was largely filmed on the Dodecanese island of Rhodes, where ‘Anthony Quinn’ Bay is still found.

Rhodes is the third largest island in Greece and the capital of the Dodecanese Island group which are located in the far east of Greece. stunning landscapes and intriguing archaeological attractions, Rhodes has a lively cultural scene with lots of great cafes and restaurants, as well as plenty of nightlife and several significant historical sites.  With a longer tourist season than most islands and a popular cruise ship destination, Rhodes is enjoyed by visitors year-round.

Further reading: Things to do in Rhodes 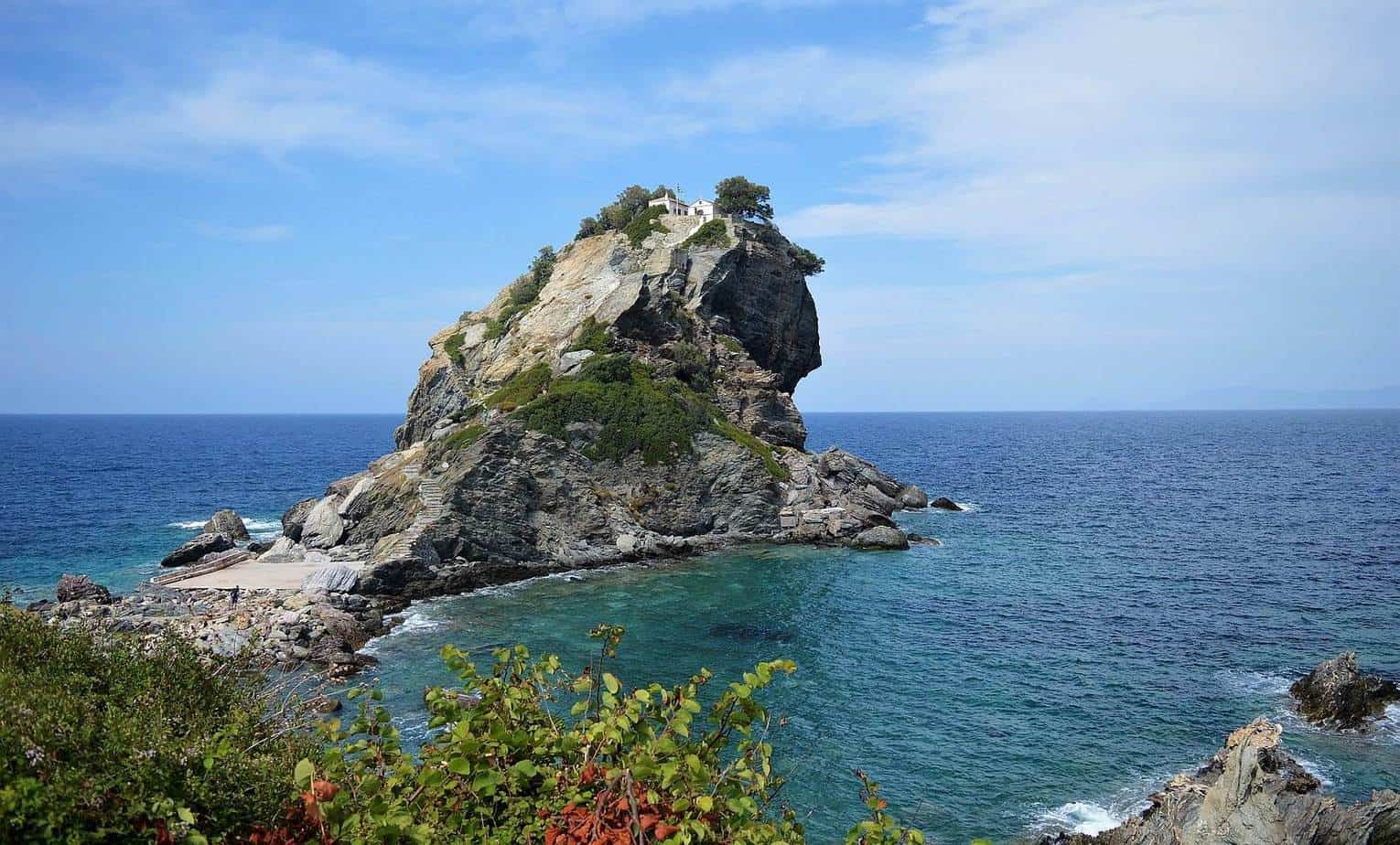 The hugely successful stage show of the same name was filmed for the big screen in 2008 and was also a huge hit.

Starring the incredibly versatile Meryl Streep, Pierce Brosnan and a raft of other well known and loved actors the story is about the wedding of a young woman on a Greek Island where her mother has taken over a run-down hotel.

Filmed around the Sporades islands and the Volos peninsula the film producers included Tom Hanks and Rita Wilson. The island of Skopelos is where most of the movie was filmed and it is a gorgeous destination to visit with beautiful beaches, verdant forests and pretty authentic towns and villages. It’s also a very affordable destination. 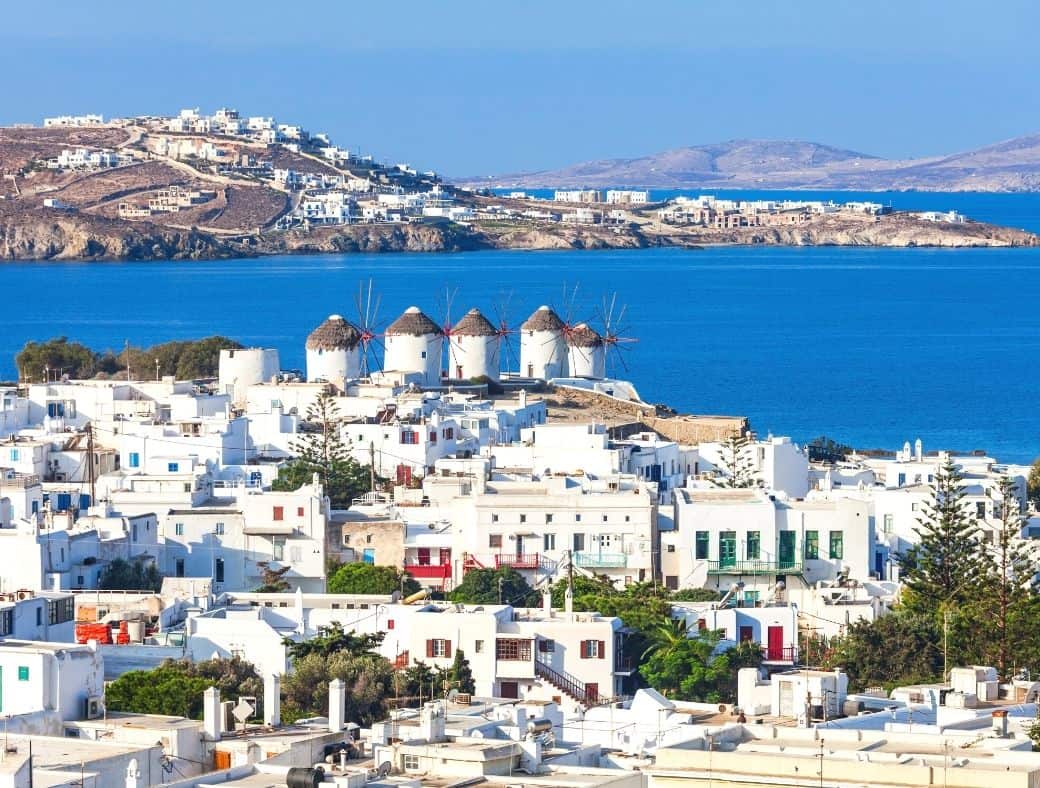 This much loved 1989 film tells the story of Shirley ( played by Pauline Collins) a lonely housewife from Liverpool, who finds herself alone on Mykonos.

She strikes up an unlikely friendship with a local taverna owner which leads to a new outlook on life.

Mykonos today is the premier party island of Greece and is home to numerous high end hotels, villas, beach clubs and restaurants. It’s the playground of the rich and famous and the instagram princesses in summer and is also often visited as a stopoff to mythical Delos, an island right next door believed to be the birthplace of the God, Apollo.

Further reading: Things to do on Mykonos 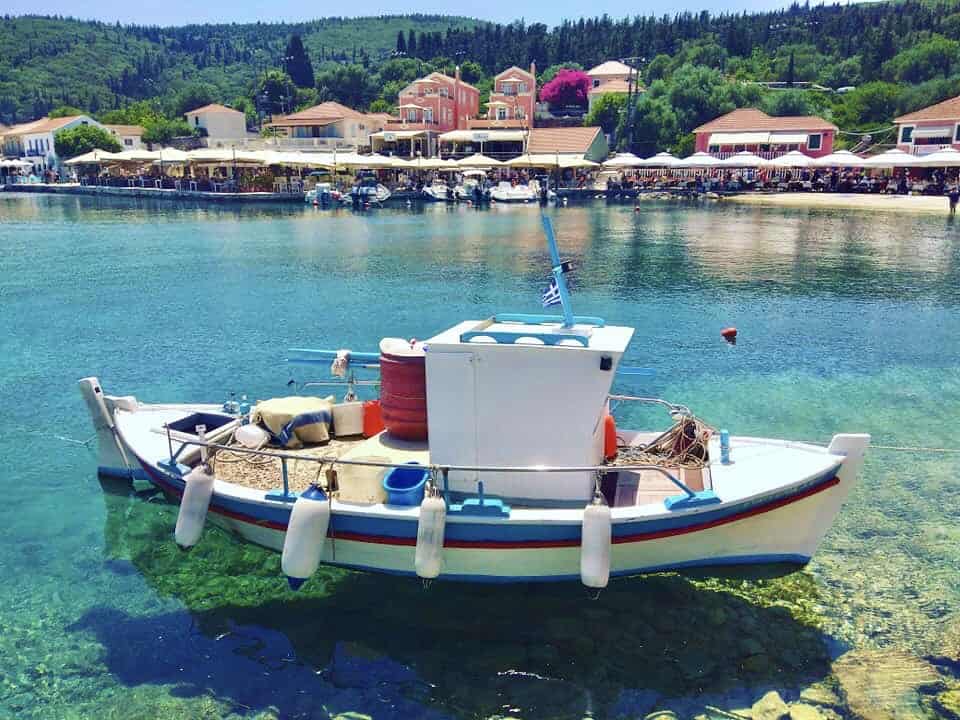 Based on the wonderful 1994 novel by Louis de Bernieres this movie is set on the island of Kefalonia during World War II.

It stars Nichols Cage and Penelope Cruz and tells the story of Greek-speaking officer Captain Antonio Corelli who falls in love with the daughter of the village doctor, and begins to question his own beliefs about war and its brutality.

Kefalonia is a big island located in the Ionian Sea and part of the Ionian Group of islands, the furthest in the west and closest to Italy. It is known for its infamous beaches, Myrtos Beach in particular, its picture postcard villages (see Fiscardo above) and its amazing outdoor activities. It’s also possible to visit the nearby islands of Ithaca and Zakynthos as day trips.

Further reading: Things to do on Kefalonia 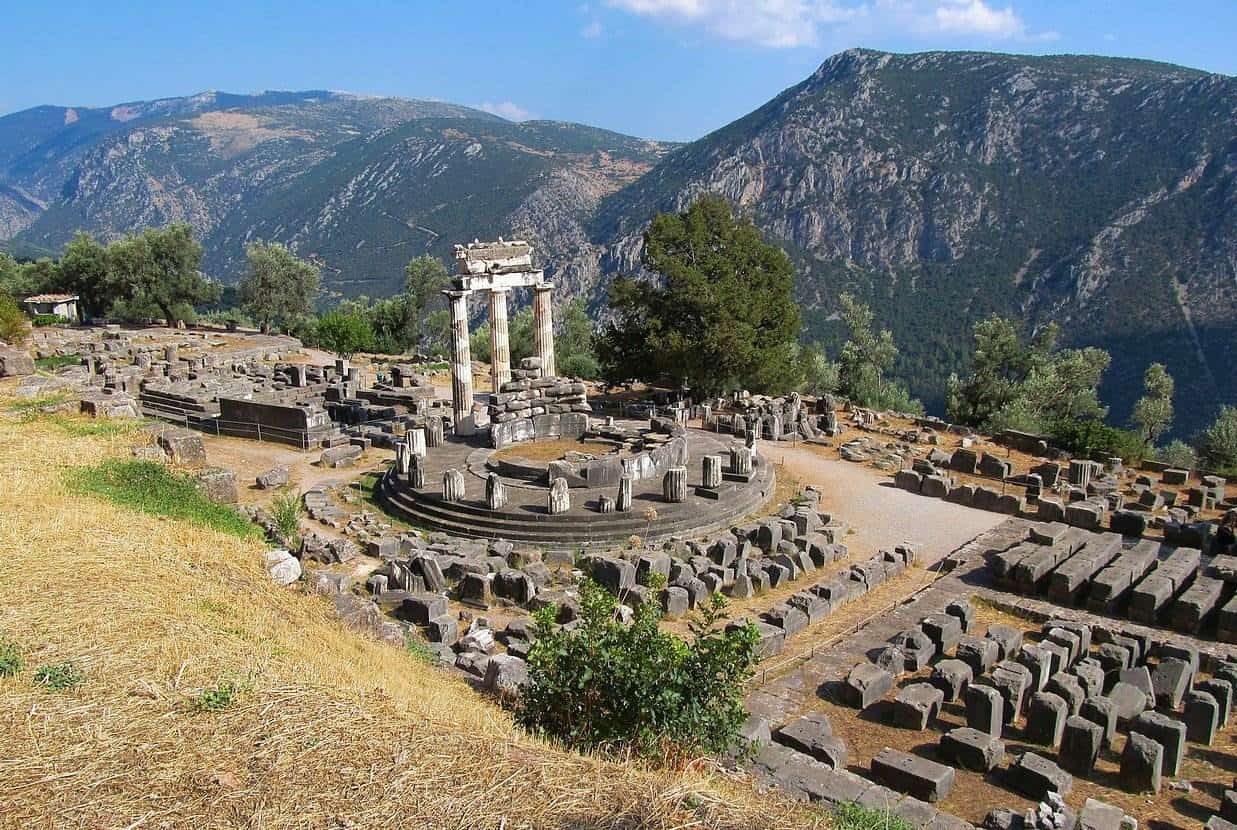 My Life in Ruins

Starring one of best know Greek-American actors, Nia Vardalos, and produced by Tom Hanks, this movie is set in Athens and Delphi and is about a Greek-American travel guide and a group of difficult American tourists.

Told that people review her tours as ‘boring’ everything seems to be going wrong for Georgia until she meets a man who teaches her how to approach life, and her tours, in a new way.

The film covers footage taken across Athens and was the first movie to be given permission to be filmed at the Acropolis. 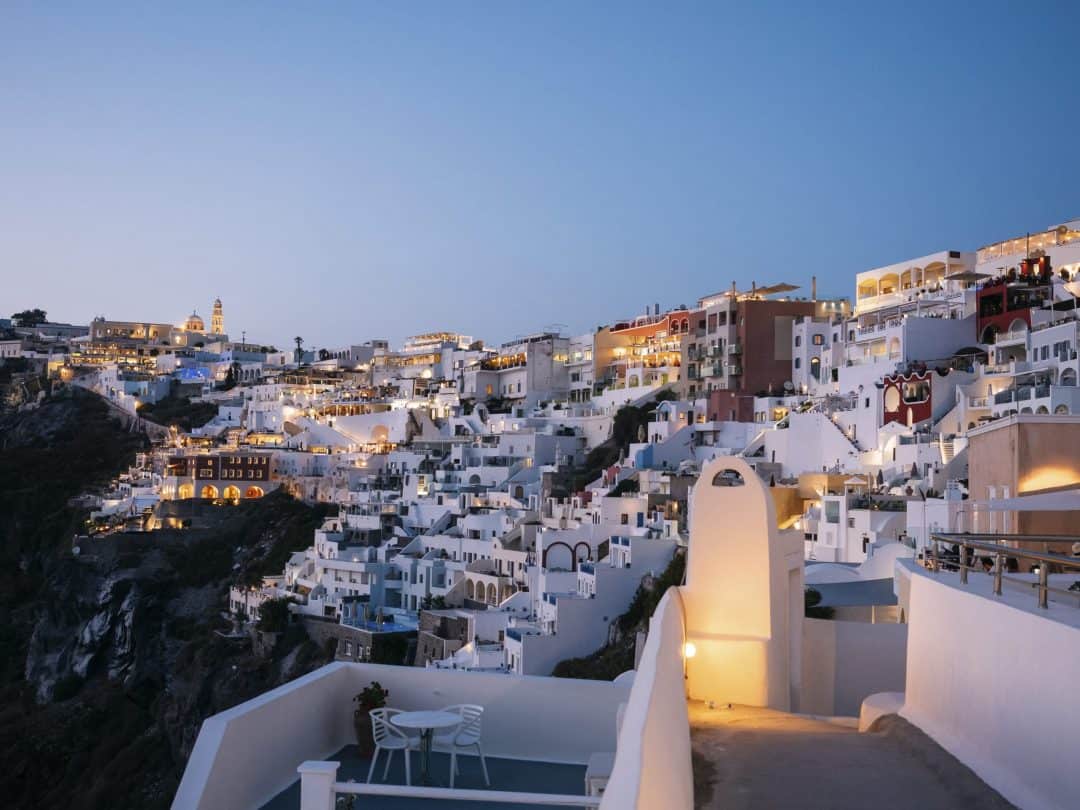 Filmed in 2002 in the quiet village (at the time!) of Oia on Santorini.

While some of the locals were thrilled at the prospect of starring alongside Angelina Jolie and being hired as an extra, there were others who were very unhappy at the idea of their quaint little town being used in a film.

The movie opens with a shot of water sweeping over the island when an earthquake strikes. Footage includes stunning footage of Santorini and surrounds including an underwater scene where Jolie’s character discovers a lost treasure of Alexander the Great, the great King of Macedonia.

Today Santorini is the most photographed island in Greece and is often considered to have some of the most iconic views in the world. People comes to Santorini year round to enjoy the unique and magical caldera views, stay in authentic cave houses and hotels, see the Akrotiri Archaeology site and enjoy the award winning wineries and much more.

Further reading: Things to do on Santorini 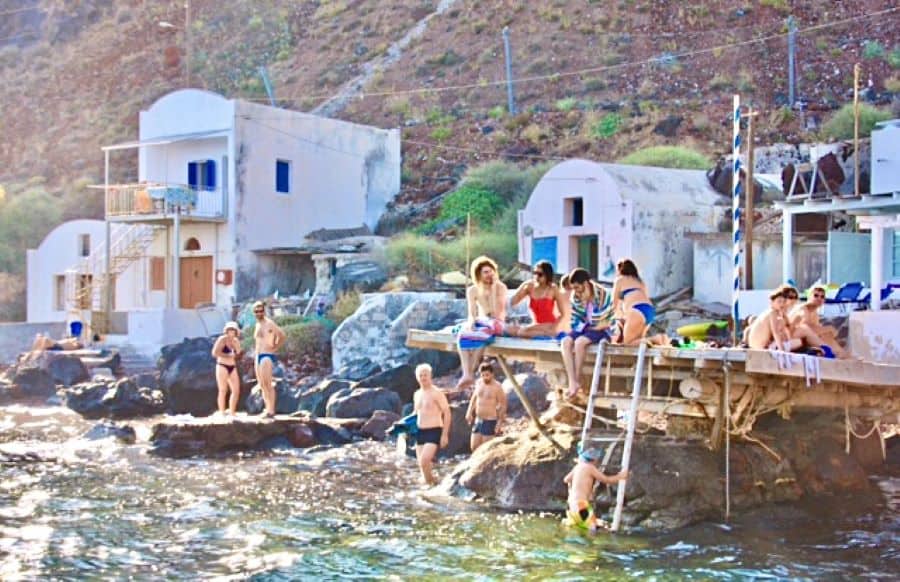 A romantic comedy filmed in 1982 about a couple American holidaying on Santorini for 9 weeks. They meet a beautiful young French woman and embark on a complex relationship with her and a number of interludes with the locals. It’s the quintessential portrayal of the challenges and joys of carefree summer love . It was poorly received by critics but many people love the sentiment and especially the photography.

Starring Daryl Hannah and Peter Gallagher this movie is thought to have started the global love affair with the island of Santorini and idyllic holidays in the Greek Islands.

Summer Lovers was directed by Randal Kleiser and featured the hit songs  “Hard to Say I’m Sorry“, a No. 1 hit for Chicago, and “I’m So Excited” by The Pointer Sisters.

Further reading: The most romantic accommodation in Oia 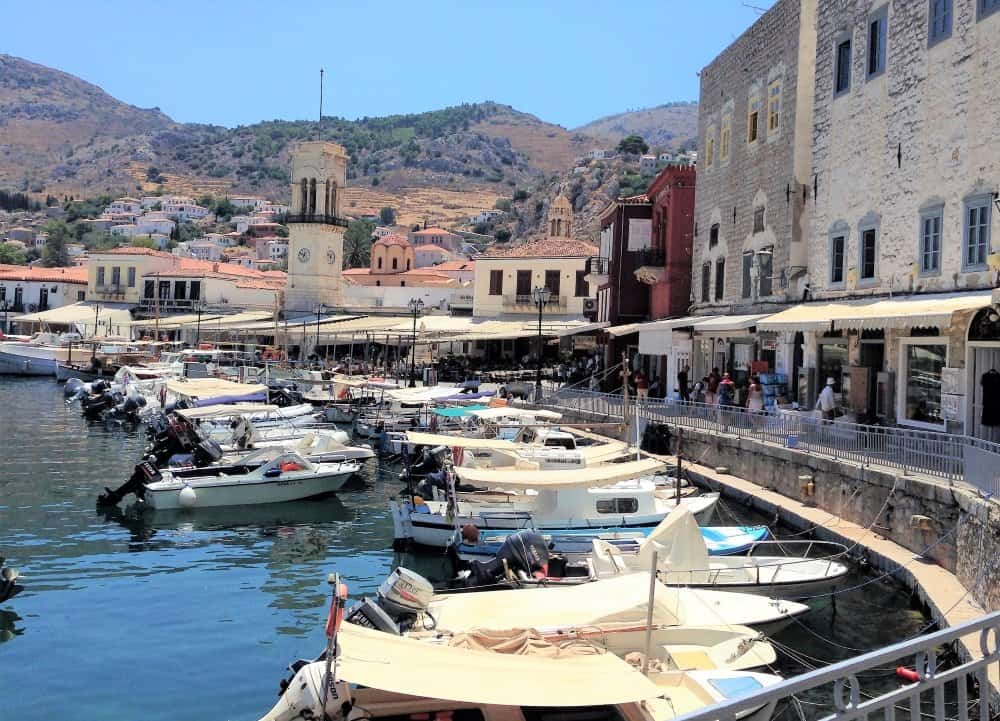 Boy on a dolphin

Filmed in 1957 and set largely on the island of Hydra, this movie starred Allan Ladd, Clifton Webb and Sophia Loren ( who sings a famous duet of the same name).

This is a romance that tells the tale of a sponge diver (Loren) who finds a ship full of precious artefacts, including the statue of a boy riding a dolphin.

Her boyfriend is an Albanian immigrant and together they enlist the help of an honest archaeologist whilst trying to deal with an unscrupulous collector. Also shot in Rhodes, Delos, Meteora and Athens.

Sophie Loren was a major Hollywood movies star when this was filmed and this showcased Greece to a worldwide audience beyond the subject of Italy, where many of her films were based.

Today Hydra is a popular weekend destinations for wealthy Athenians and tourists looking for rich local culture and arts on an island close to Athens. It is quite different from most islands in that it is car-free and this adds to the tranquility experienced there. It is worth spending a few days here or even visiting as part of a Saronic islands day-cruise. 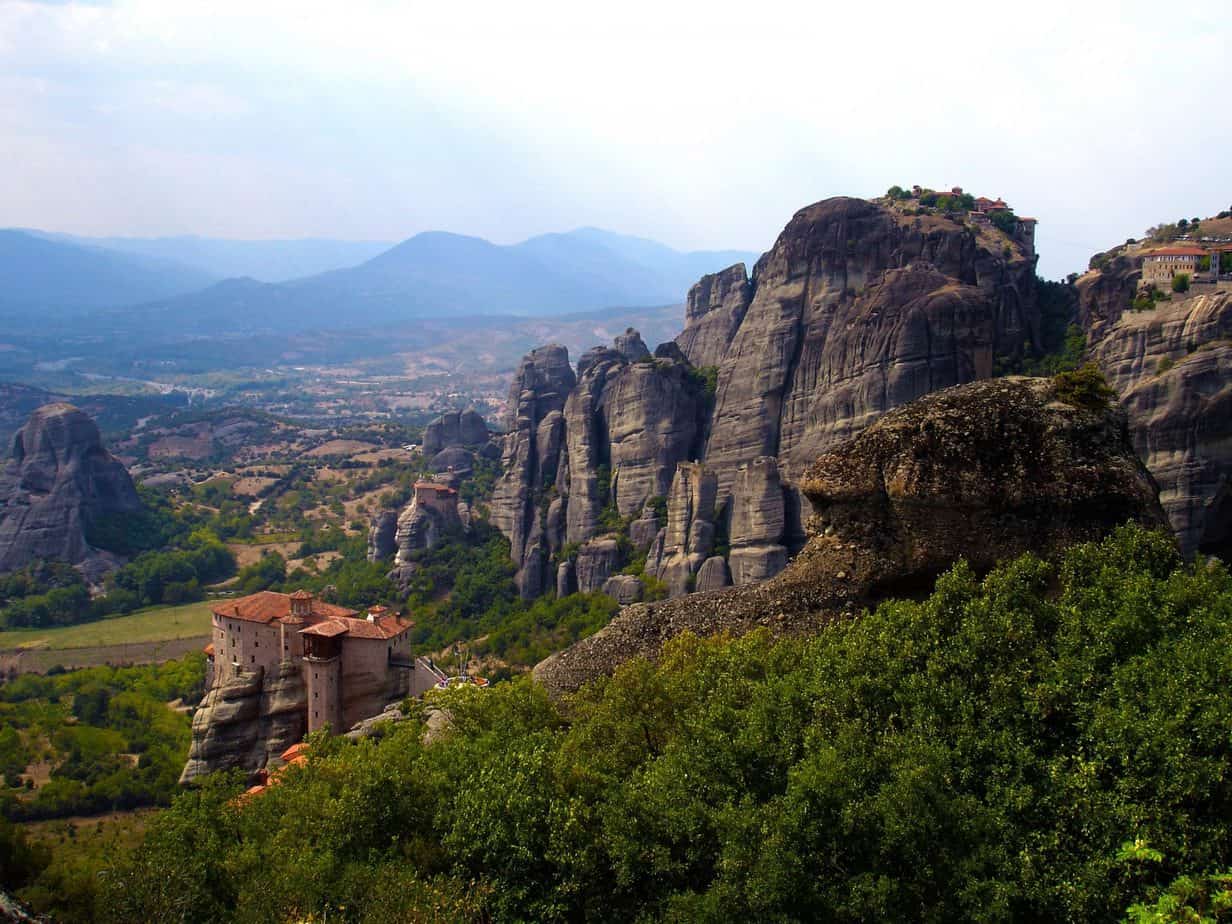 For your eyes only

This James Bond classic starring Roger Moore as 007 and is considered one of his best.

Picking up after the murder of his wife Bond is caught up in a quest to find the missile command centre lost in a shipwreck in the Ionian Sea.

There are some memorable car chases and a boat explosion on the island of Corfu before Bond moves onto the monastery of St Cecil in Meteora.

Apparently, the Monks were quite opposed to the filming and even tried to sabotage it!

Today Meteora is one of the most incredible destinations you can visit in Greece. There are six monasteries open to the public and it is a particularly stunning setting to see at Sunset or dawn. The local villages are quite authentic and charming and we highly recommend staying at least overnight to truly appreciate this very special destination. 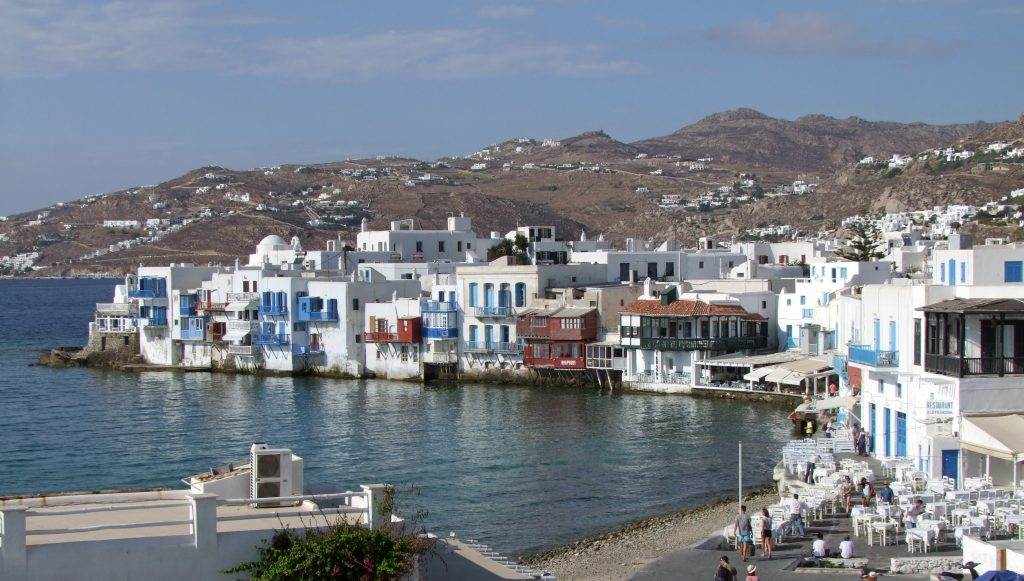 This highly successful action thriller based on the novel of the same name stars Matt Damon as Jason Bourne, a man rescued by a fishing boat with severe memory loss.

He attempts to discover his true identity whilst uncovering a significant conspiracy theory involving the CIA.

Set in various locations across Europe and particularly in Paris and Zurich, the movie ends in Mykonos with a romantic twist. 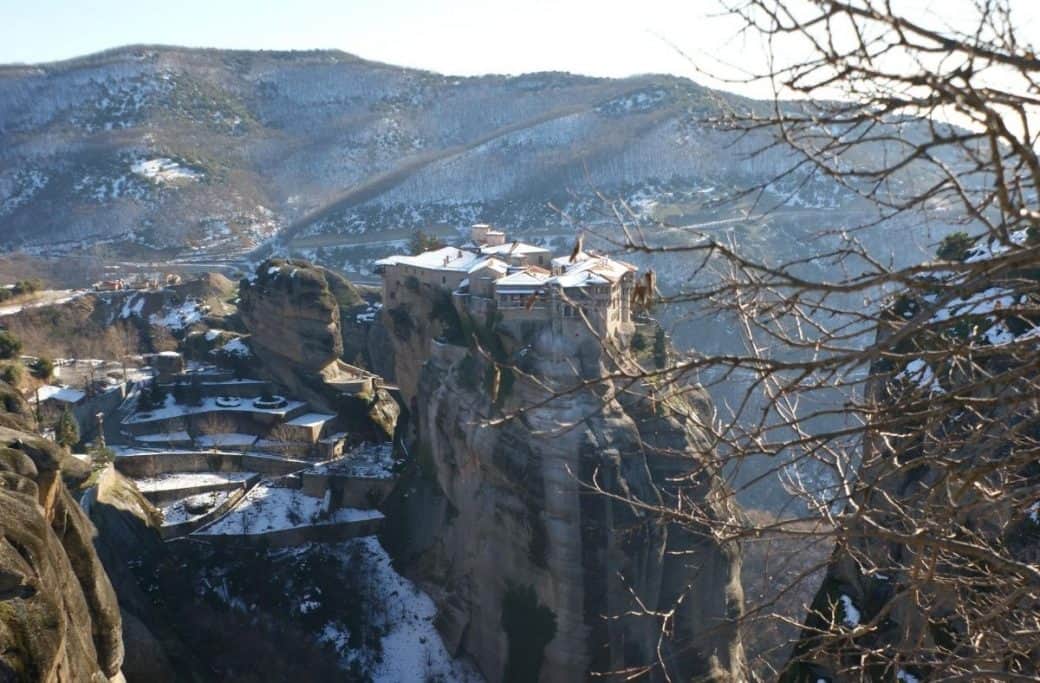 GOT fans got to enjoy a virtual trip around the world throughout the 8 seasons of the show with some extraordinary footage shot in locations from Ireland to Morocco.

Greece also got a look in with Meteora’s famed mountain-top monasteries digitally mastered into the series’s first season as a backdrop for the Sky Cells where Tyrion Lannister was imprisoned.

The stunning landscape and the incredible monastries really must be visited! 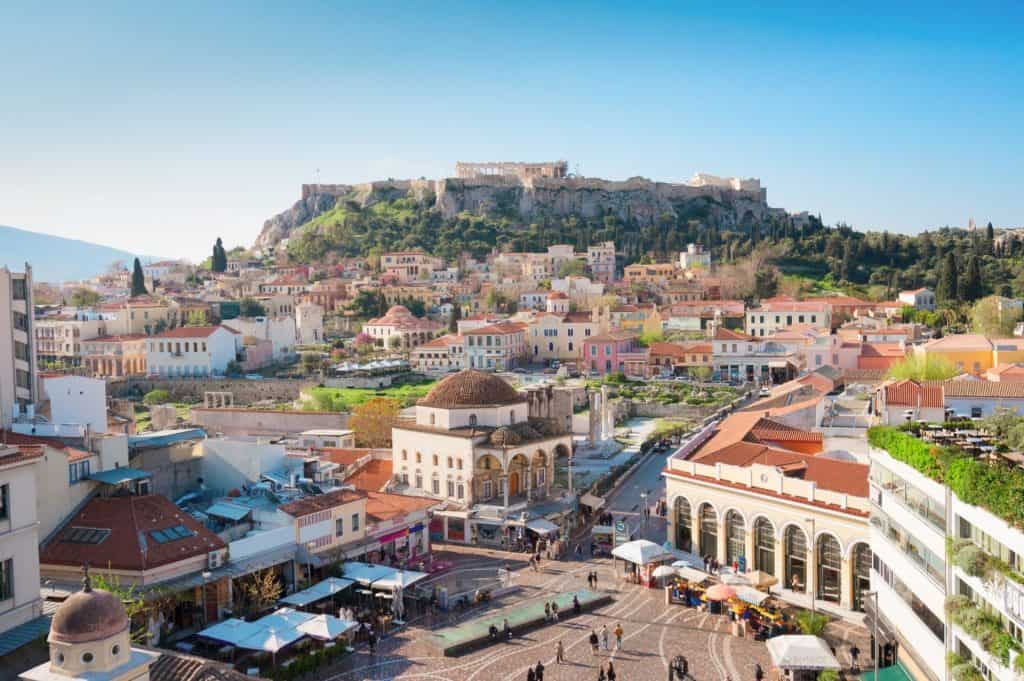 Beckett is an action thriller filmed in and around Athens and was released in 2021.

The premise of the story is about an American tourist, John Washington, who has a terrible accident and is forced to run for his life in an attempt to get to the American Embassy to clear his name.

The story is set during a time of political unrest and there are twists and turns as he gets more tangled up in a deep web of conspiracy.

It’s worth watching but many people feel it could have done a better job of showcasing the capital in amongst all the car-chases and intrigue. 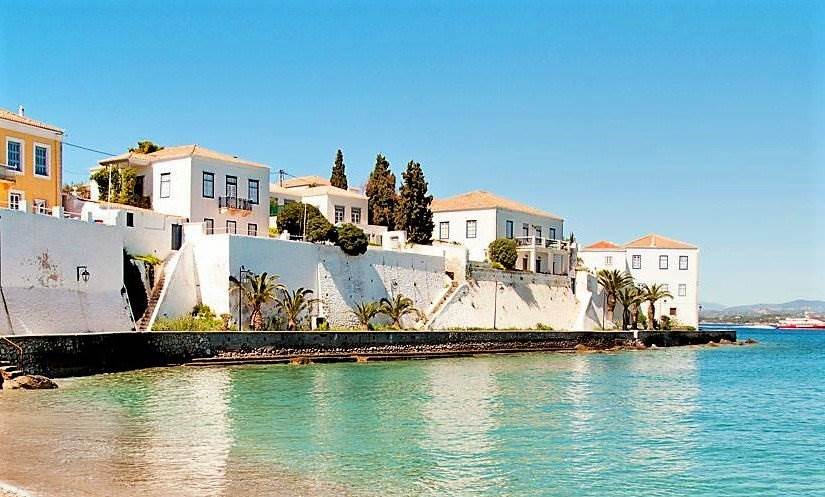 The Lost Daughter is a multi-award-winning film released in 2022 starring Olivia Coleman and Dakota Fanning and directed by Maggie Gyllenhaal.

It tells the tale of Leda, a middle-aged divorcee and mother who goes on Vacation in Greece to try and overcome her loneliness and longing. She becomes involved with another family staying nearby and a series of confrontations occur both locally and internally for her.

Filmed on the island of Spetses in the Saronic Gulf the movie was initially supposed to be set in the USA but was relocated due to the COVID-19 pandemic. The movie was nominated for over 100 awards including Oscars, BAFTAs and the Screen Actors Guild.

Spetses is an upmarket island in the Saronic Group of islands, which, like Hydra is favored by Athenians, many of who have holiday homes there. It is largely car-free and played a significant role in various wars and conflicts over the years.