SHOULD YOU DO A SANTORINI DONKEY RIDE? 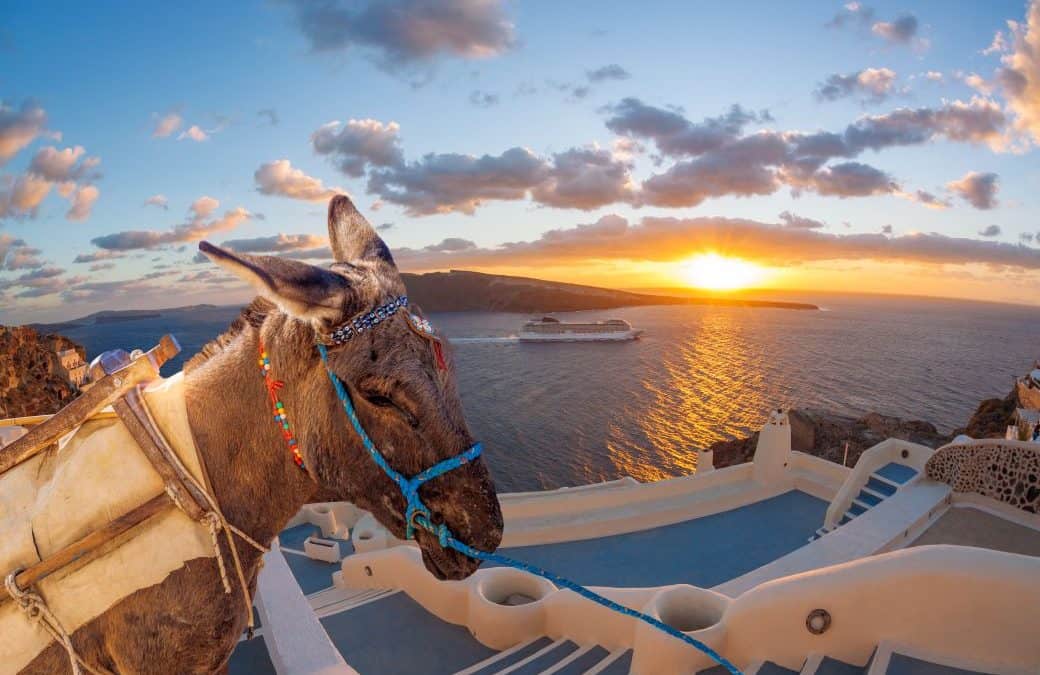 In the age of social media and globalization, people should be inherently aware of the issues around working animals and the treatment of them. So when visiting Greece it pays to educate yourself about whether to partake in activities such as a Santorini Donkey ride.

It’s a controversial topic of course with many people torn between wanting to do the right thing by the animals and continuing to use them in a commercial manner that often supports entire communities.

The reality is if all working animals were retired tomorrow they would not be looked after. So how can we, as travellers, be more mindful of the impact we have on the treatment and wellbeing of working animals in countries we visit?

In Greece, the animals that spring to mind, and are much valued by Greeks, is the humble Donkey and his cousin the Mule. We’ve all seen footage of their mistreatment, particularly on the island of Santorini, and have seen or heard various reports of solutions.

Locally officials are, understandably, reluctant to announce a weight limit on the tourists who ride them for fear of fat-shaming, and animal rights activists are up in arms.

Whether you are visiting the island on a day trip, spending 3 days on Santorini or more, the best way to tackle the Santorini Donkey Ride issue is to educate yourself, and others, on what the facts are and what are the alternatives.

Are you looking for a fun activity in Santorini?

It will be no surprise that Santorini is popular especially in Summer and Spring. There are a lot of activities and tours to choose from but it can be overwhelming.

Here are a few quick suggestions:

Top Places to Stay in Santorini 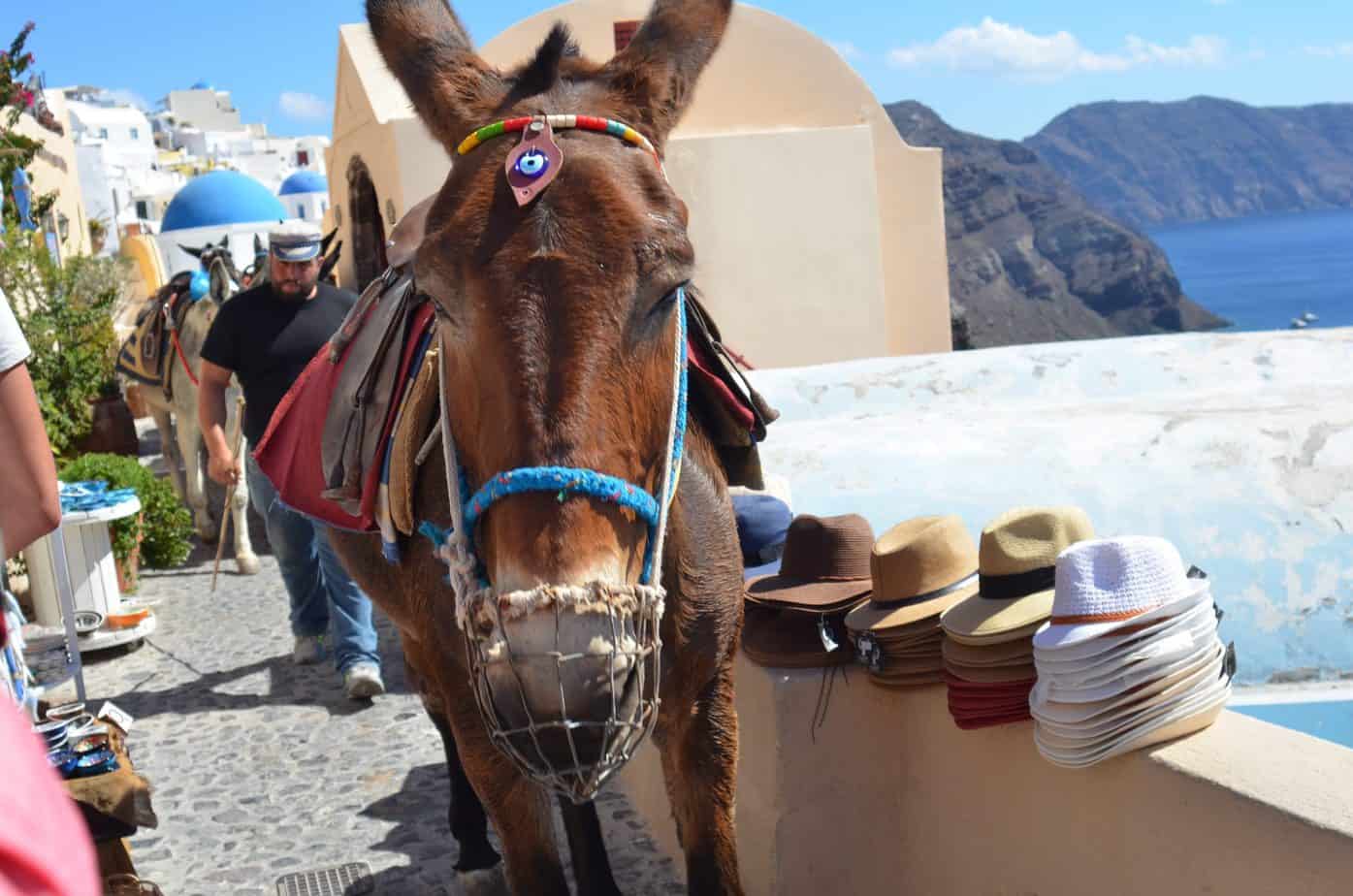 What is a Donkey and a Mule?

Everyone knows what a Horse is but how about Donkeys and Mules?  You’ve heard about them, you may have come across them, but do you know much about them?

What is a Donkey?

A Donkey, also known as an Ass – Equus africanus asinus, is a domesticated member of the horse family and is descended from the African Wild Ass. They have been used as working animals for thousands of years and there are believed to be over 40 million in the world. It is believed they were first domesticated in ancient Egypt and spread through the Mediterranean and Middle East from there.

A male Donkey is called a Jack while a female is a Jenny.

Donkey’s vary considerably in size particularly between developed vs developing countries. They can be between 80 and 160cms tall and 80 to 400 kilos and more. Their life expectancy can be up to 50 years but in developing countries where they are worked hard it may only be around 15 years.

Donkeys have large ears and therefore a very keen sense of hearing. They have a reputation as being stubborn but many believe this is just their strong survival instinct that makes them very unwilling to do things that they think are dangerous or frightening. They adapt well to hot climates and can be very dependable and loyal.

They are quite intelligent and friendly and are quick visual learners.

What is a Mule?

Mules are said to be strong, intelligent, hardy and live long lives so they are highly prized and one of the most commonly used working animals in the world. The largest breeders of Mules is in fact China, followed by Mexico.

Mules are used in many countries for the transport of both people and goods and in fact, are often valuable members of Armies. Commercial Pack Mules are commonly used to supply mountaineering base camps and hiking posts.

An interesting observation was once made by Charles Darwin; “The Mule always appears to me a most surprising animal. That a hybrid should possess more reason, memory, obstinacy, social affection, powers of muscular endurance, and length of life, than either of its parents, seems to indicate that art has here outdone nature.”

Sometimes you may also come across an animal that is the result of a pairing between a Donkey and a Horse stallion which are called Hinny’s.

Mules and Hinny’s are almost always sterile and cannot reproduce, unlike Donkeys. 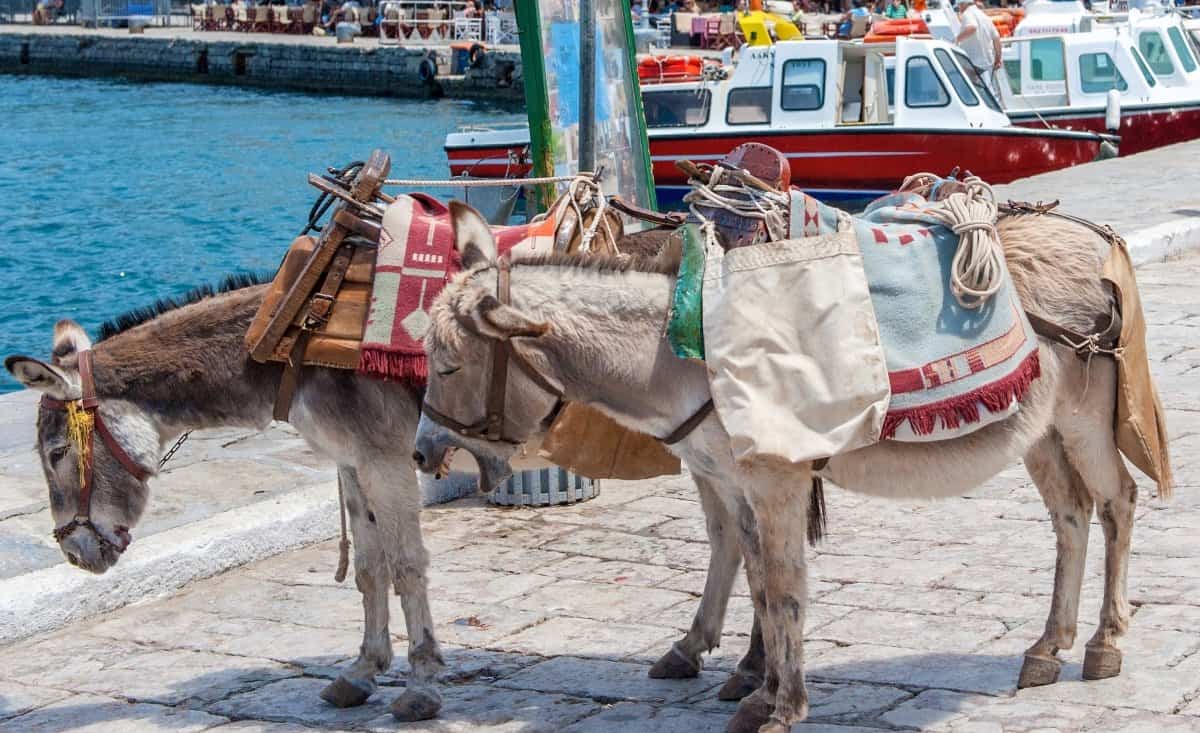 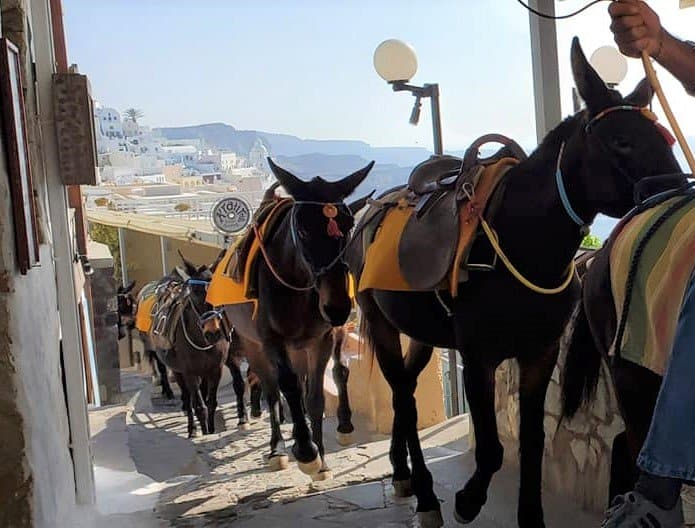 Should you ride a Donkey?

People have been riding Donkeys for thousands of years. In fact they were used to transport wounded soldiers in Gallipoli among other things. Legend has it a certain Virgin rode one to Bethlehem to deliver a certain Saviour.

Today you will see farmers and fishermen riding their donkeys in countries such as Greece, Morocco, Spain, Mexico and the Middle East although they are mostly used for threshing, milling and transport.

As many horse owners may know the rule of thumb is that you should weigh no more than about a third ( some say a quarter!) of a horse’s weight. The average farmer in the countries mentioned probably weigh less than 80kilos ( 175 pounds) so the Donkey is ‘usually’ able to manage this load.

For donkeys used in tourism, however, this can be a big problem with western tourists often weighing in excess of 100 kilos and often much more!

In places like Santorini you also have to think about the 600 stairs that the Donkeys need to climb to get from the Port, where they are most often hired, to the town of Fira at the top. Then there is also the sweltering heat which can reach mid 30 degrees Celsius ( 86F+) in summer, made even hotter by the reflection from the many white walls and buildings.

It is ‘probably’ ok for the Donkeys to carry your bags but keep in mind the previous comments.

On top of that there can be up to 8000 cruise ship passengers in port in Santorini at any given time. With around 400 Donkeys and Mules on the island, how many times have those animals been made to do that trek in a single day?

Do NOT ride the Donkeys. If your children are hell-bent on doing it make sure you hire a Mule for them but think carefully about getting one for yourself. If this disappoints the kids you can still interact with them. Offer to pay the handler a few Euro just for a pat and a photo and perhaps sneak an apple or carrot from your cruise ship or hotel as a treat for them.

On Santorini it is also quite expensive to ride a Donkey so hopefully this is another deterrent. Rides are advertised at 20 Euro per person whilst the cable car is only 6. A family or group in a taxi could expect to pay 20-30 euro all together depending on where you are going.

A nice alternative to a Santorini Donkey ride is supporting the charities that work with them.

There are Donkey Sanctuaries in various places across the world and we also like to support SPANA a charity that works with all sorts of working animals.

The reality is working animals prevent millions of children from missing out on school and it is more realistic to try and ensure these animals are well looked after than set free. 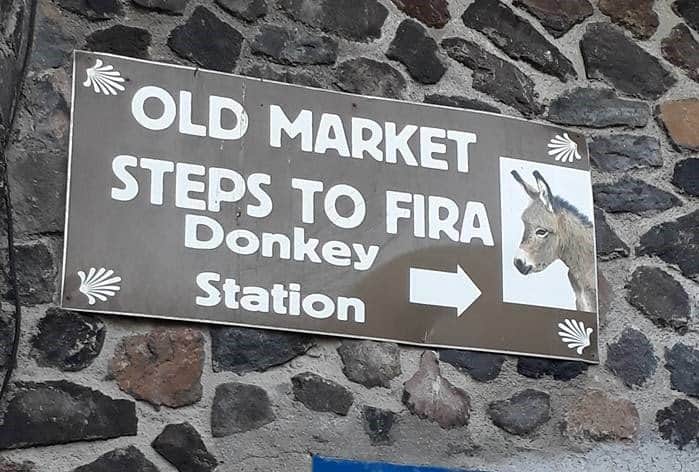 What are other transport options on Santorini?

If you are visiting Santorini there are two ports – the ‘Old Port’ is where cruise ships tender boats and Superyachts dock while public ferries docks at ‘New Port’ aka as Athinios.

In Old Port you can either catch the cable car, a public bus or a taxi to the top or have your Hotel or Hire Car company meet you. The Cable Car was generously donated by a local benefactor and a portion of the ticket sales go to the Donkey owners. A lot of people enjoy taking the Cable car up and walking back down.

A Taxi should charge you between 20-30 Euro depending on where you are going.

In Athinios you will find taxis and hotel transfers ( of you’ve pre-booked).

There is also Amoudi Bay where the small local ferry goes over to Thirassia Island and Vlychada Port too where private yachts dock.

There are always Taxis to meet flights but you may have to wait up to 30 minutes to get one. There simply are not enough on the island to meet demand.

Most Santorini hotels will also happily organise a private transfer for you although these can be expense. Make sure you get a quite first.

There is no Uber, Lyft or Beat on Santorini!

For Bus timetables for the island check KTels website.

For Hire Cars we use and recommend RentalCars. You can also hire ATVs and Scooters but please check your insurance first. Accidents are common! 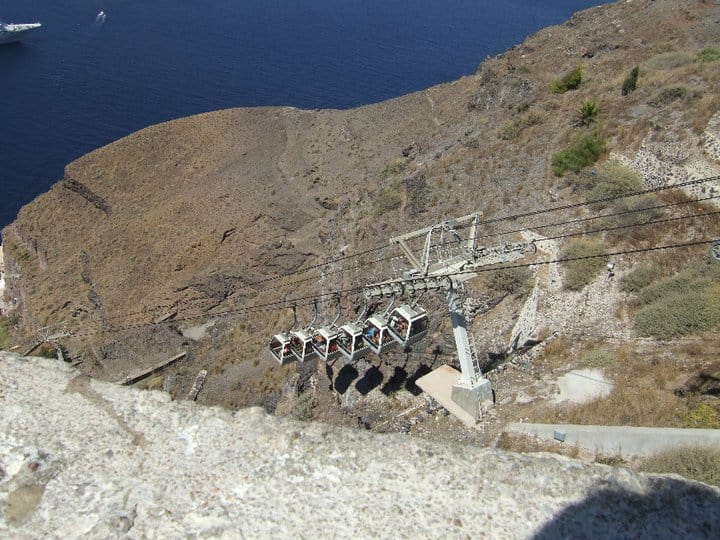 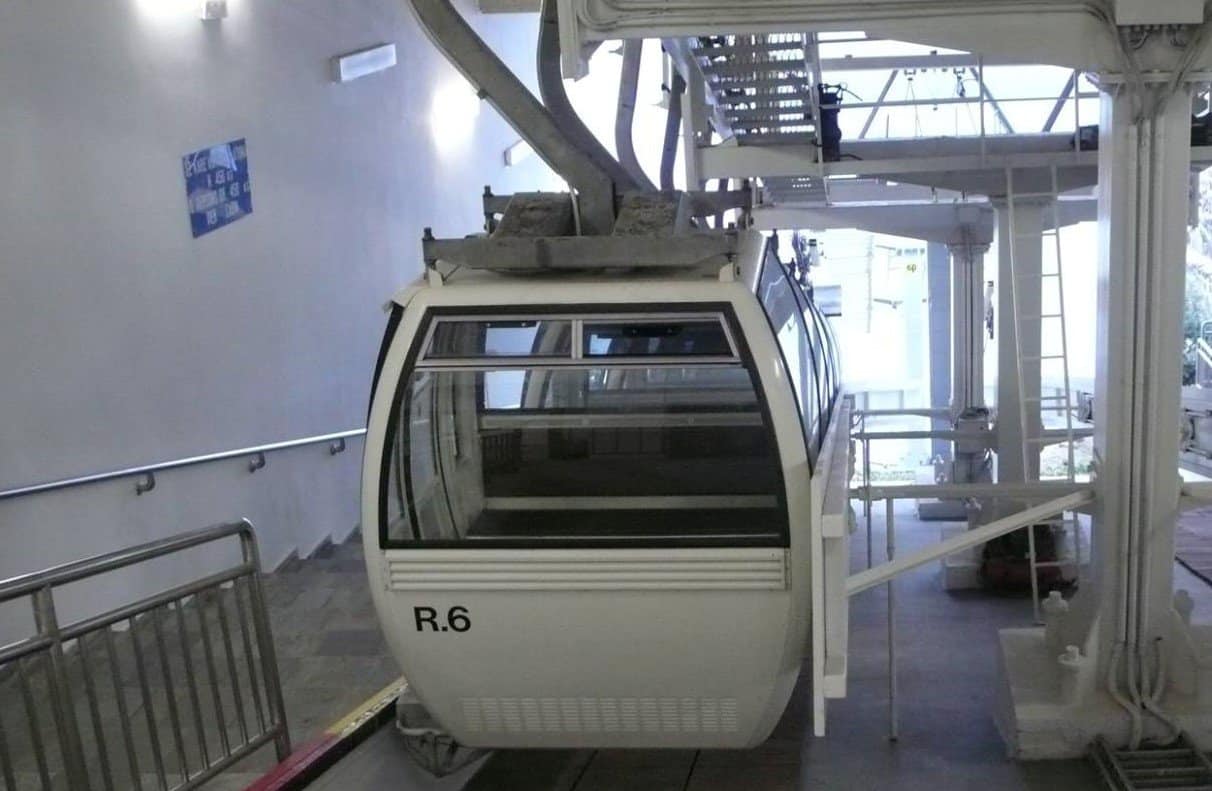 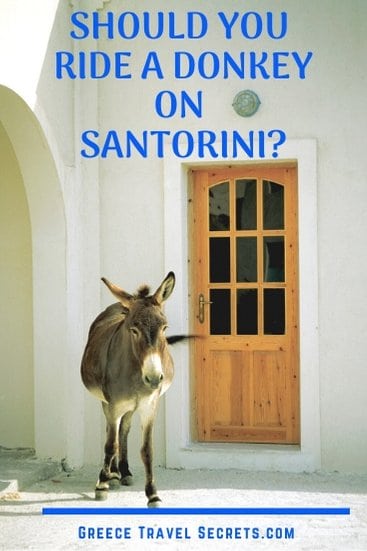 HOW TO MAKE THE MOST OF SANTORINI ON A BUDGET