EASTER IN GREECE – A GUIDE TO ORTHODOX EASTER AND MORE

Easter in Greece is a huge celebration, even bigger than Christmas. Known as ‘Pascha’ it lasts for an entire week with preparations such as fasting occurring weeks in advance.

This time of the year and the customs and rituals are taken very seriously by Greeks, even those that are not particularly religious. It is considered a time to worship and serve but also a time to reflect and connect with the community and family.

There are several major ceremonies that occur, and then significant celebrations that vary across the country but with a common theme of joy and happiness.

If you are in Greek during Orthodox Easter you are in for an incredible experience.

When is Easter in Greece

Easter in Greece takes place at different times each year depending on the Julian calendar.

Generally, the date for Easter is set on the first full moon after both the Spring Equinox and Passover, which usually occurs around the middle to the end of March. This means every year Orthodox Easter takes place between one and four weeks after Catholic (Western) Easter.

What happens during Greek Easter?

Of course, not every Greek fasts, but I am surprised with just how many do.

The restaurants cater for people who are fasting, and there are also a number of tasty vegan dishes on the menu.  At first, the rules for fasting seem quite simple.

No meat, no dairy, no fish and no alcohol.

Holy Week starts with processions and much candle lighting on Good Friday. This is a day of mourning and you may see girls decorating the Epitafio – the funeral bier which is then  paraded in a somber march.

On Saturday the Ceremony of the Resurrection takes place in churches all over the country and the bells are rung for extended times.

Easter Sunday is the biggest religious holiday of the year. This is the pinnacle of Greek Easter and focused on a very important Midnight Mass.

At the end of Mass  the priest brandish their lanterns aloft and call out  “Xristos anesti!” (Christ has risen). The parishiners reply “Alithos anesti!” (Truly He is Risen) before lighting their candles from the Priests flame and returning home to make a smoky black cross on the lintel above their front doors, to bring protection for the following year.

On this day it is traditional to eat a soup called Magaritsa and make eggs with red-dyed shells. you crack together with another person for good luck.

After Church, there is a huge feast where fasting is broken. People splurge on lamb and goat and cook them on open spitroasts in their homes and villages and the red eggs are cracked together with other people for good luck.

Easter is celebrated with great passion and fervour across Greece but some places do things a bit differently and it’s really worth going out of your way to be in one of these locations if you can.

Santorini at Easter is very special. Of course it is quite extraodrinary at any time of the year but at Easter the island lights up all along the caldera and is quite a spectacle.

Pyrgos is one of the island’s five castles cities and was the capital of Santorini for centuries.

This castle town is well-preserved and in many spots you can see a glimpse of history through the 15th century architecture. It is also high up with breathtaking panoramic views of the whole island.

On Good Friday the villagers light up thousands of aluminum cans and place them on every house, roof top, church, and on the Venetian castle, creating an unforgettable scene at night.

As you approach the village from below, the view of the flickering torches is so spectacular that visitors come from all over the island just to witness this event.

Easter is celebrated across Crete and there are a number of destinations where it is particularly special.

In Chania guests are invited to visit the churches and monastaries and participate in the local customs. In Agios Nikolous the town is all lit up and there are fireworks at night.

Many of the processions across the island include burning bonfires and effigies of the traitor, Judas.

There are traditions, customs and celebrations across Paros. On Holy Friday in Parakia there locals attend services in three churches who then join for a procession during the litany of the Epitaph.

After Midnight mass on Saturday the festive atmosphere begins in the villages and towns with bells ringing and fireworks lit.

In Naoussa the festivities last all day with everyone congregating at the tavernas around the port sharing a communal party theme with music, open bars and dancing that often doesn’t end until dawn.

In Marpissa there are a special celebration of ‘Agapi’ which means Love. Young people dress in traditional clothing and there are theatrical performances that feature scenes from the Resurrection of Lazarus, the Last Supper, Prayers at Mount Olive, the Ascent to Cavalry and many other moments capturing the journey of Jesus to the Cross and Redemption

The celebrations don’t even end at Easter as the Festival of St George often occurs around the same time and the are 3 churches with that Saint name on the island.

In Chios, there is a very unqiue event with their famous ‘rocket war’ where rockets fire is exchanged between two castles, Saint Mark church and the people of Virgin Mary Erythiani ( Red Madonna) churches just after 8 pm on Easter Saturday. This occurs in Vrontada, a village 5 km north of Chios Town.

The aim of the tradition is to hit the bell tower of the other church with the rockets, which are wooden sticks loaded with gunpowder. This has caused some significant damage in the past so modern events are much more regulated.

This is one of the most spectacular ( and also somewhat dangerous) customs that takes place during Easter in Greece and is not to be missed if you are lucky enough to be visiting Chios – a fascinating and very unique island, with a lot to offer visitors year-round.

Corfu is famous for it’s Easter celebrations and is considered to have the biggest crowds and the most incredible celebrations in Greece.

There are a number of ceremonies and activities that take place along the main square, Spianada, in Corfu Town including the traditional throwing of the pots ( called Botides) from the balconies. It is the custom that the townsfolk call out ‘Xristos Anesti’ as the pots smash on the ground. It’s believed the tradition started with the Venetians during the 14th-18th centuries when they threw old pots out their window to start each new year.

There are also marching bands and processions of priests and religious effigies and icons as well as a huge fireworks display at night. There are 17 orchestras on Corfu so music plays a big part in the celebrations.

Patmos is where the Bible’s Book of Revelations was believed to be written by St. John so it is a very popular destination for Christians and Pilgrims from all over the world.

At Easter everyone heads to the UNESCO World Heritage listed St. John the Evangelist Monastery  where they can participate in the Washing of the Feet ceremony. There is also a re-enactment of the Last Supper and a reading of the Gospel in 7 languages.

The Celebration and ceremonies end each year with a procession of the monastery’s icons on the Tuesday after Easter Sunday.

Being on of the holiest places in Greece it is no surprise that Easter in Meteora is quite an event. All the Monasteries will be lit up at night making them even more beautiful and astonishing as ever.

In the town of Kalambaka and the nearby village of Kastraki the locals participate in processions and feasts that occur after midnight mass. 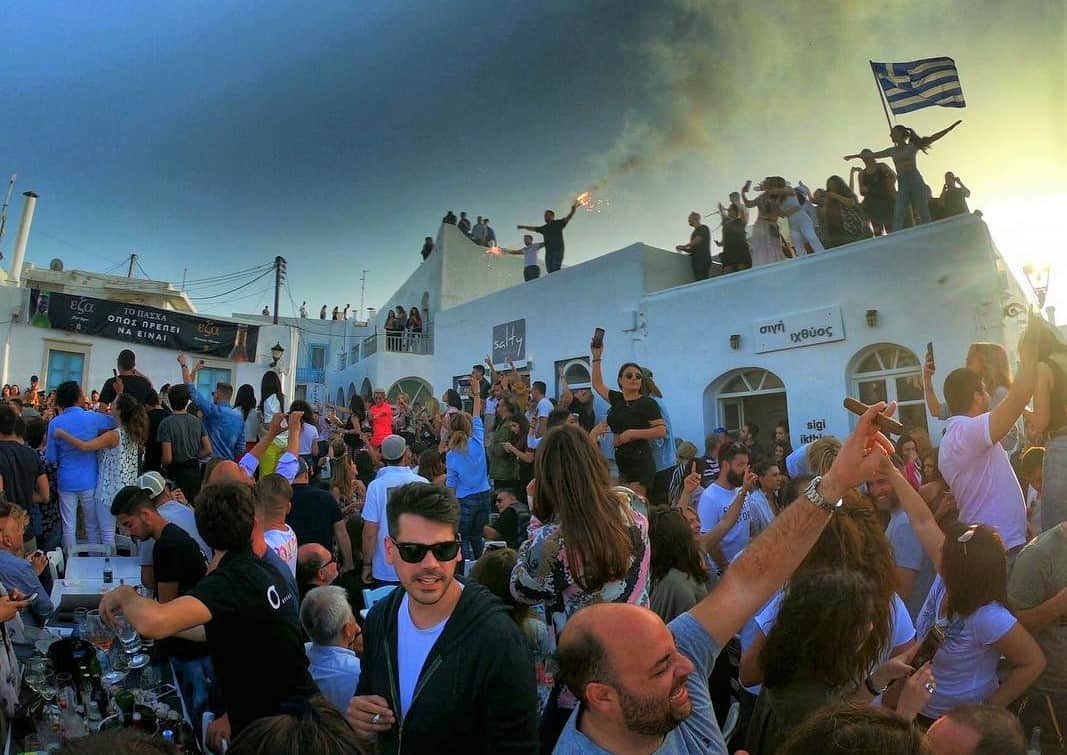 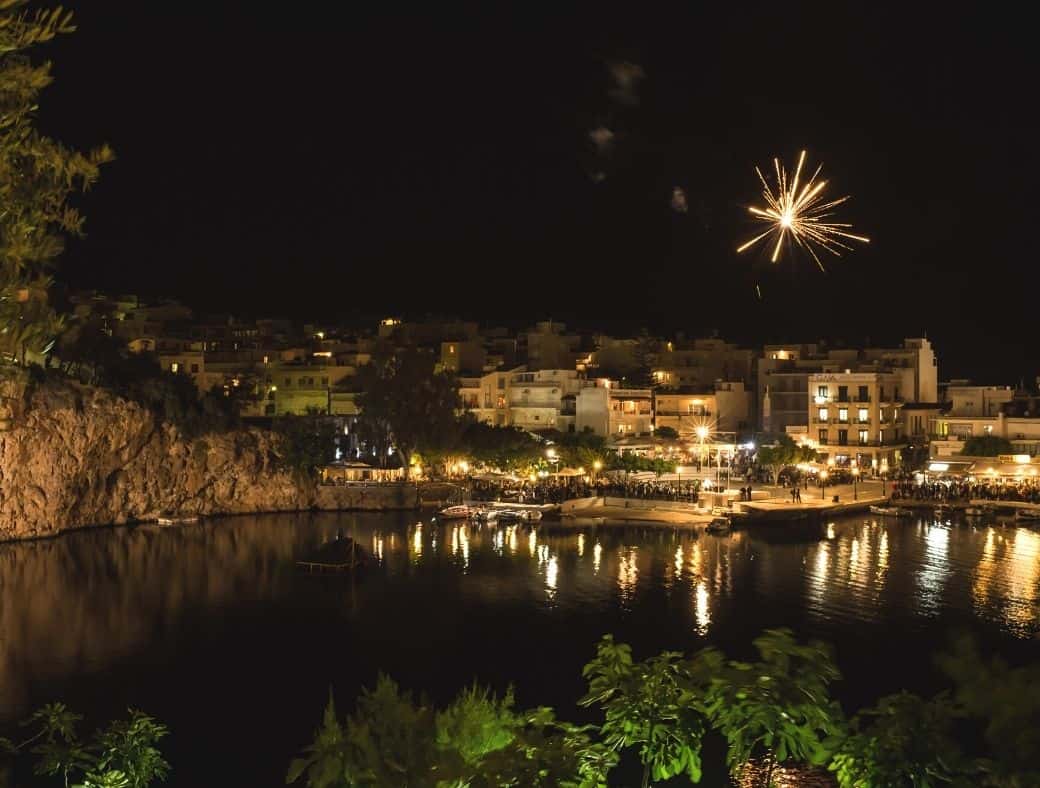 Food and Customs at Easter in Greece

Given people have fasted leading up to Easter it is no wonder that food plays an important role in the celebrations and huge feasts are prepared for families and communities to enjoy.

One of the main traditions at Greek Easter is Tsougrisma, where eggs are dyed to symbolise the blood of Christ, and two people crack them together.

Whole lambs are roasted over a fire pit for several hours, before being taken home for the family feast. The ritual of eating lamb goes right back to the Bible where John called Jesus the Lamb of God and Abraham has to sacrifice an animal as restitution for the people sins.

For many people, this may be the only time of the year that this occurs as lamb is expensive and often saved for special occasions. People who are unable ( or simply don’t want) to roast a whole lamb may prepare roast lamb and potatoes in the oven or bake it in paper in a delicious dish called Lamb Kleftiko.

There is a special bread that is made at Easter time called Tsouerki. This is usually shaped into a plait before being baked.

There are also special biscuits called Koulourakia which are quick and easy to make. They are fairly dry and have little flavour but are used to dip into coffee.

One of the most traditional dishes is a soup called Magiritsa. This is what is traditionally served on Easter Saturday to break the fast but before the main feast of Sunday. It is made from Lamb Offal ( taken from the animal as it’s prepared for roasting the following day) and is believed to help ease the digestive system back into eating meat. It is a polarising dish and one favoured by older Greeks these days rather than the younger generations. 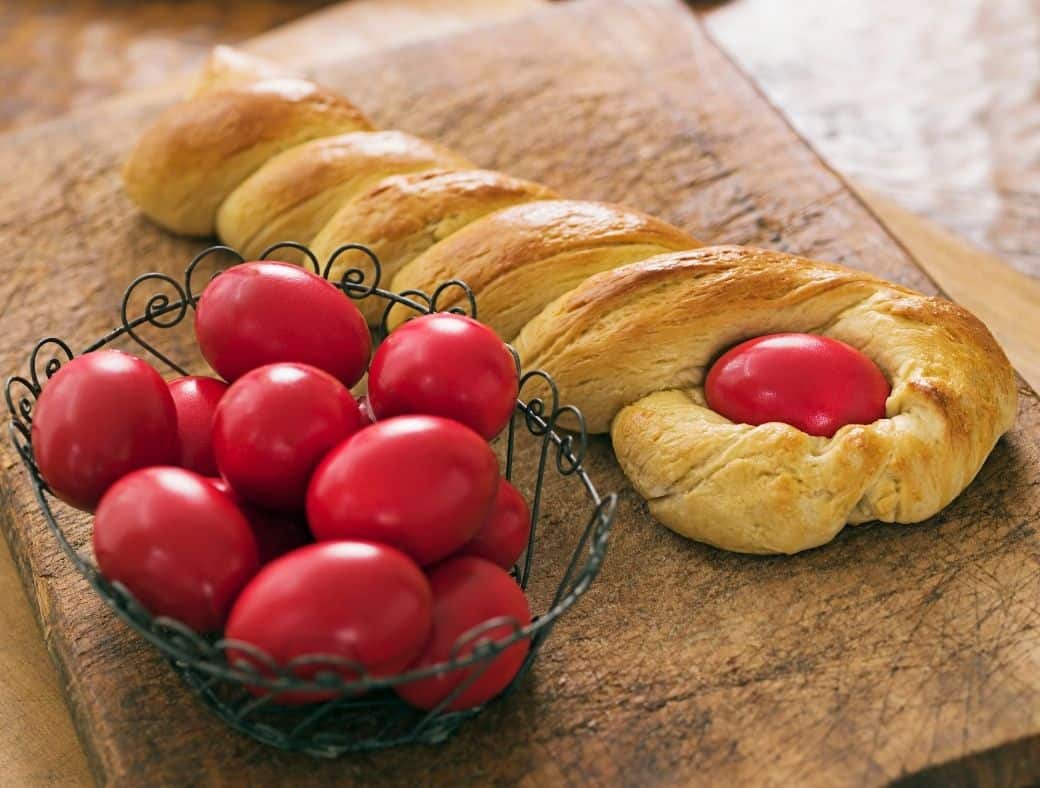