HOW TO GET TO SPINALONGA ISLAND 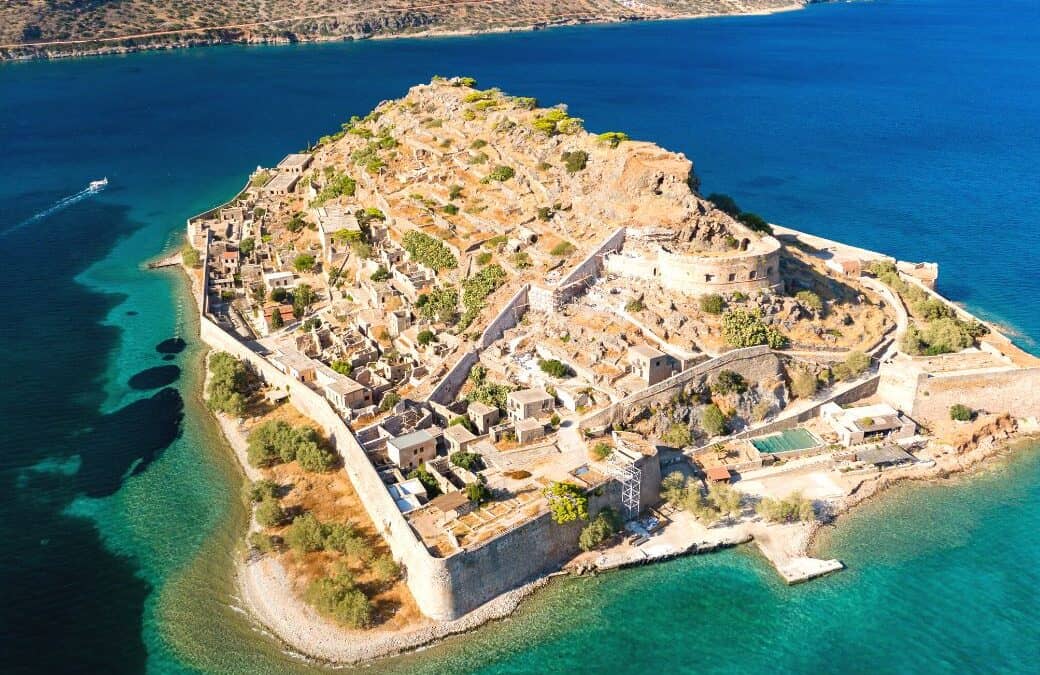 Spinalonga is a small island located in the Gulf of Elounda in Crete, Greece. It can be accessed by boat from the town of Elounda. The island has a historical significance as a leper colony, where people with leprosy were isolated from the rest of society. There are several options when it comes to how to get to Spinalonga and this covers all of them. 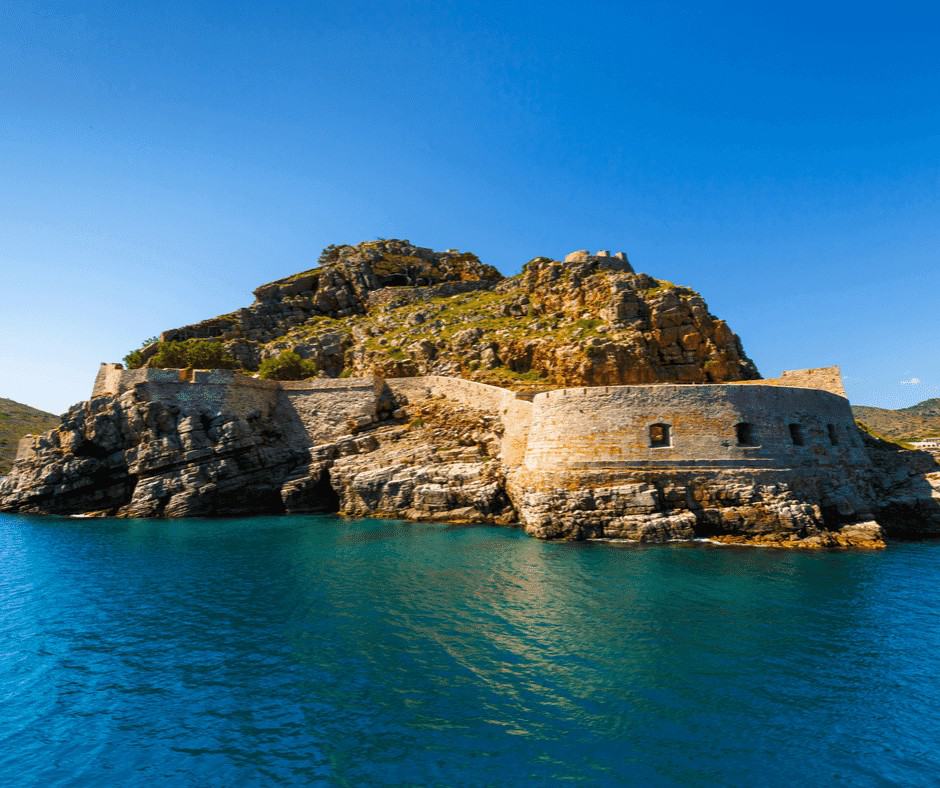 Where is Spinalonga Island?

Spinalonga is located in Western Crete, in the regional unit of Lasithi, very close to Agios Nikolaos, the capital city of the region.

You can access it by boat from Agios Nikolaos, which takes around 20-30 minutes, or Plaka, or Elounda, which takes less than 10 minutes.

The history of Spinalonga.

Spinalonga is an island with a rich history. It was originally settled by the Venetians in the 16th century and was fortified to protect against Ottoman invasions.

In the late 19th century, it was used as a place of exile for political prisoners. In 1903, it was converted into a leper colony, where people with leprosy were sent to live in isolation from society.

The colony operated until 1957, when the last patients were moved to a hospital on the mainland. Initially, patients arrived from Crete, but after the unification with Greece in 1913 patients also came from the mainland.

The island was then abandoned until it was opened to tourists in the 1970s. Today, it is a popular tourist destination known for its well-preserved fortifications and its history as a leper colony.

Life on Spinalonga for the leper colony would have been very difficult and isolating.

Leprosy, also known as Hansen’s disease, is a chronic infectious disease that causes disfigurement and disability. It was highly stigmatized in the past, leading to discrimination and ostracization for those affected by it. As a result, people with leprosy were often sent to live in leper colonies like Spinalonga in order to prevent the spread of the disease and to isolate those affected from the rest of society.

Living on the island would have been challenging for many reasons. The lepers were cut off from their families and communities, and the island itself was small and had limited resources, leading to basic living conditions.

In addition to these practical difficulties, the lepers would also have had to face the physical and emotional challenges of living with Hansen’s disease, such as numbness, loss of sensation, muscle weakness, and atrophy, which can make it difficult for sufferers to feel pain, temperature changes, and other sensations, often increasing the risk of injury. There were also psychological effects, such as stigmatization and discrimination, although this was of course lessened given they were living amongst other sufferers.

Despite these challenges, the lepers who lived on Spinalonga were able to form a community and support each other. Many residents had their own homes and there were shops, a school, a market, churches, a cinema, and a Kafenio (cafe). 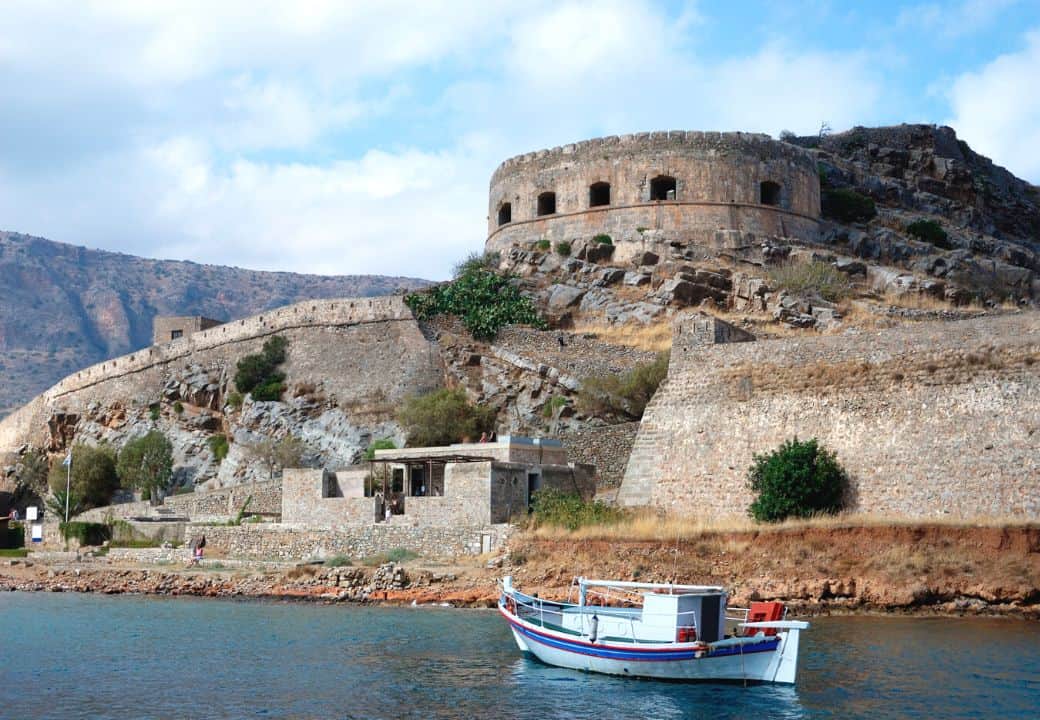 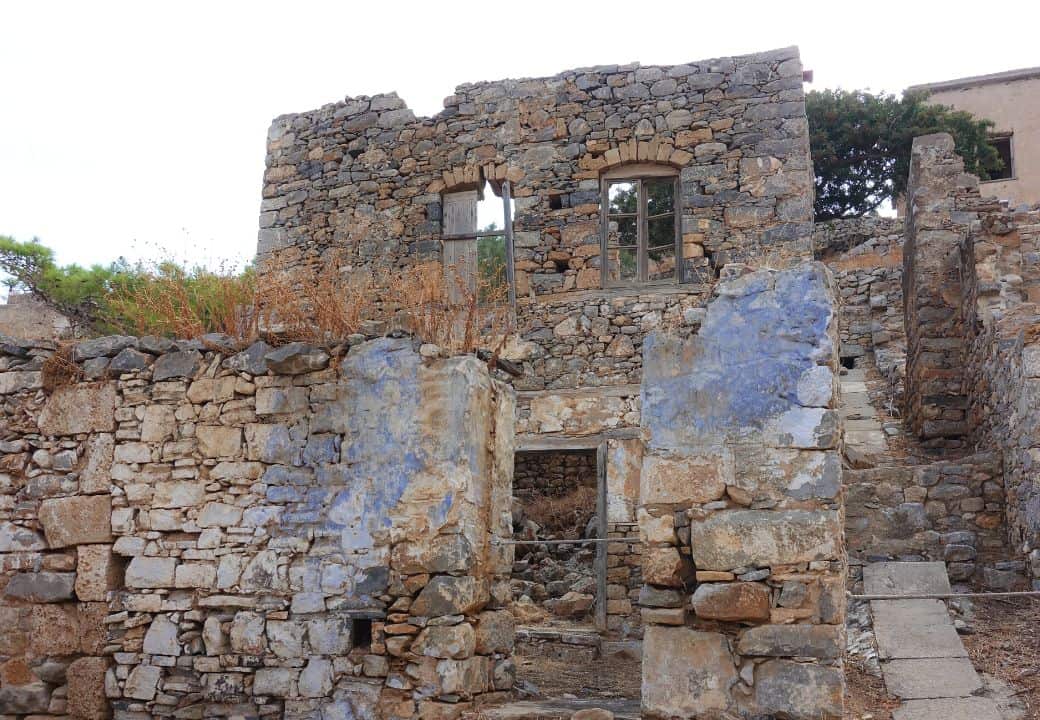 How to get to Spinalonga

To get to Spinalonga island, you can take a boat from mainland Crete.

There are several boat tour operators that offer daily trips to the island from the towns of Elounda and Agios Nikolaos, and you can also catch a boat from Plaka Beach.

The trip takes about 20-30 minutes by boat, and tickets can be purchased at the departure points or in advance through a tour operator. It is also possible to rent a private boat to visit the island.

Once you arrive on the island, you can explore the well-preserved fortifications and learn about its history as a leper colony. There are also several cafes and souvenir shops on the island and actually the water there is perfect for swimming too.

These boat tour operators offer a variety of tour options, including half-day and full-day tours, sunset tours, and private tours. The tours typically include round-trip boat transportation to and from Spinalonga, as well as guided tours of the island.

There are also tours that pick you up from different places in Crete such as:

Prices and departure times may vary depending on the tour operator and the type of tour you choose. We recommend you book your tour in advance, either online or through your hotel, to ensure availability.

Boat Tours from Elounda to Spinalonga

There are several boat tour operators in Elounda that offer daily trips to Spinalonga.

Again, these operators offer a range of tour options, including half-day and full-day tours, sunset tours, and private tours. The tours typically include round-trip boat transportation to and from Spinalonga, as well as guided tours of the island.

Boat Tours from Plaka to Spinalonga 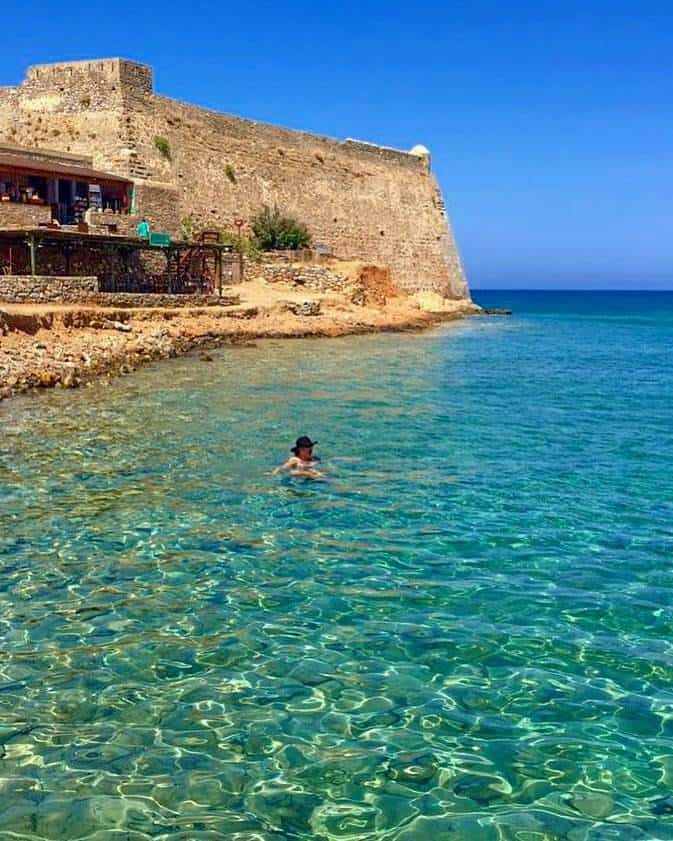 Main Points of interest on Spinalonga

Apart from the Museum and a general look around the town try and make sure your see the following: 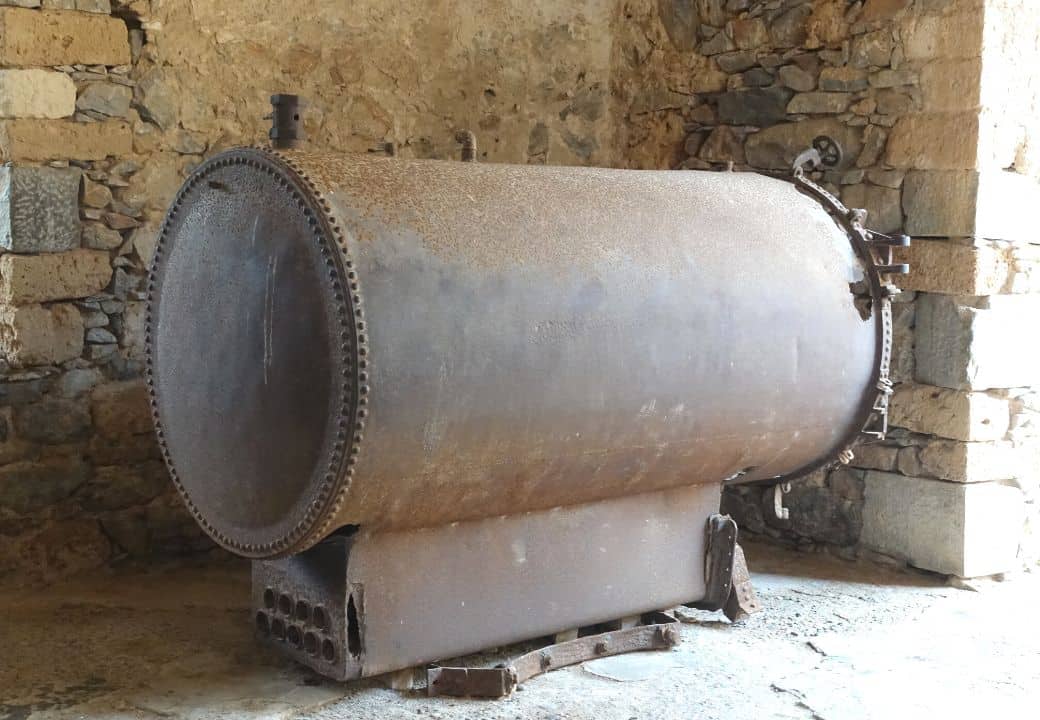 Things to do on Crete

Where to stay in Crete 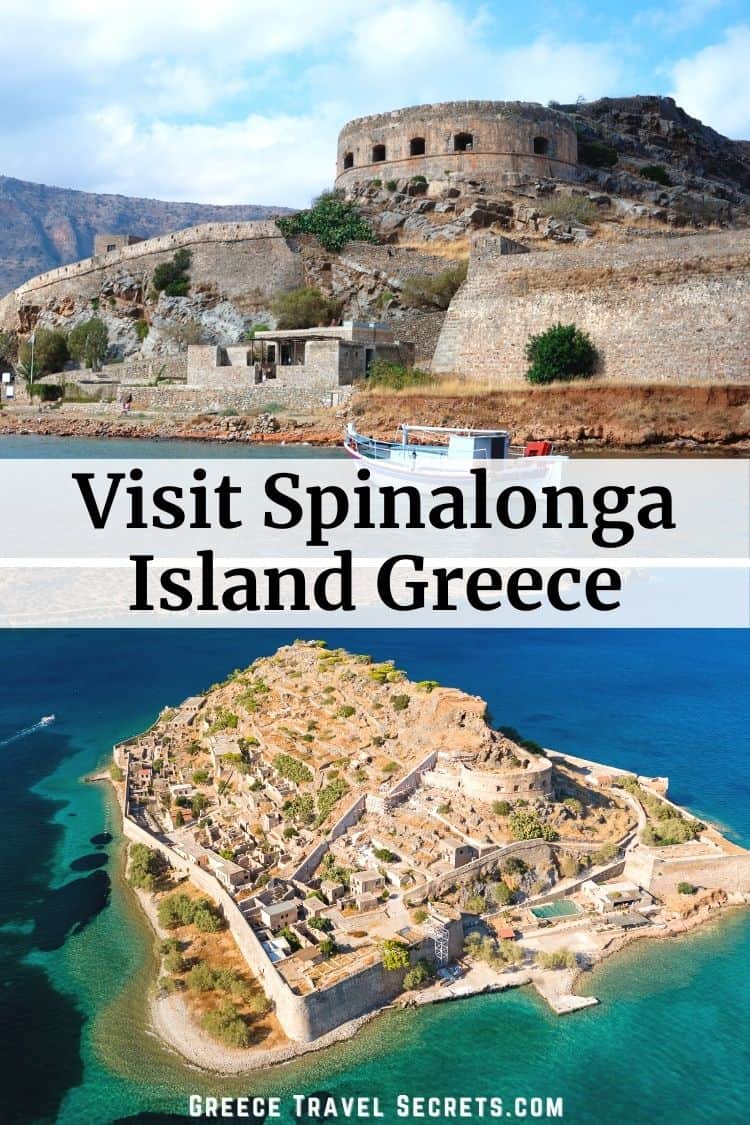 WHICH ARE THE BEST GREEK ISLANDS IN OCTOBER TO VISIT?