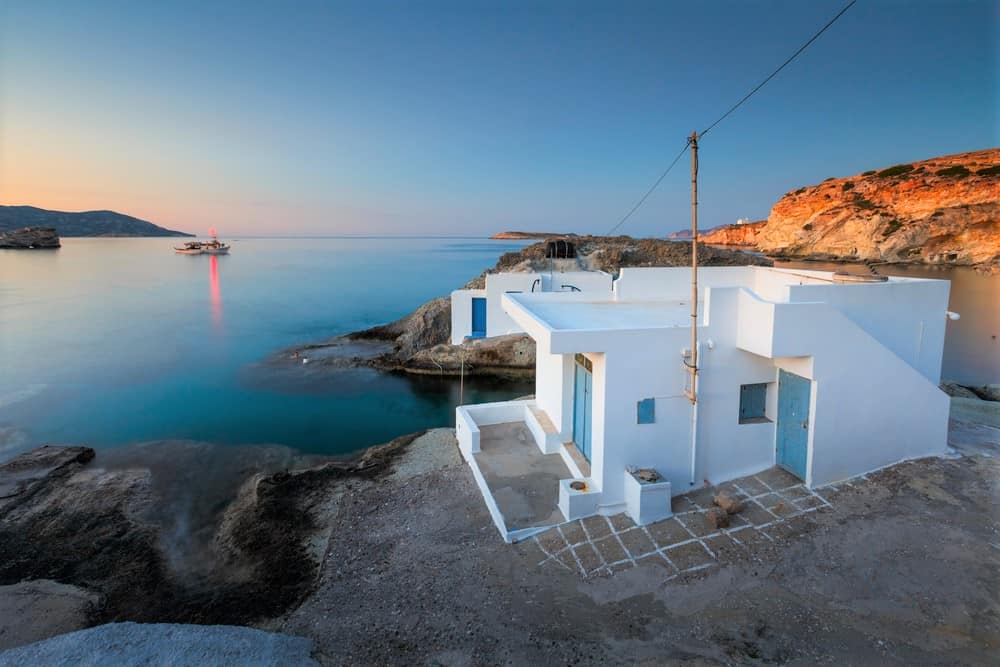 Right next to Milos in the Cyclades Islands in the Aegean Sea is a gorgeous island that few people have heard of let alone visited. Kimolos Island is actually quite accessible given its proximity to Milos and has many similar attractions.

With excellent beaches, charming small villages and a rich history, this is a Greek Island for a quiet and utterly relaxing vacation and an authentic Greek experience.

Note: This article may contain affiliate links. This means any booking made by you via a link creates a small commission that helps pay for the running costs of this site, at no further cost to you.

For more advice and information from even more travellers be sure to join our Facebook Group.

Contents hide
1 When to visit Kimolos
2 Where is Kimolos?
3 How to get to Kimolos Island
4 Kimolos Hotels and Houses
5 Things to do on Kimolos
5.1 Kimolos Beaches
5.2 Monuments and Museums on Kimolos
5.3 Museums
5.4 Nature and Outdoors
6 Events on Kimolos
6.1 Religious Events
6.2 Other Cultural Events
7 Where to eat on Kimolos
8 Yassas! Keep an eye on your inbox for tales, tips and travel inspiration.

When to visit Kimolos

The best time to visit Kimolos is May to September. High season, like all of Greece, is late June to early September.

Summer is wonderful with warm seas,  blue skies every day and a regular array of boats and yachts visiting. It doesn’t get as busy as most of the other islands and retains a chilled, laid back vibe.

If you visit between October and April you may find most things closed.

Kimolos is a small island of around 1000 inhabitants that sits just 1km from the northeastern tip of its much more famous neighbour, Milos.

Milos is a rather extraordinary island in the Western Cyclades that is roughly 2 hours northwest of Santorini by ferry, 90 minutes west of Paros, 3 hours south of Athens and 4 hours north of Crete.

How to get to Kimolos Island

There is no airport on Kimolos and you can only access it by sea.

There are ferries to Kimolos from Athens several times a day in Summer but it is a long journey with several stops along the way at islands like Kythnos and Sifnos, and often more.

The quickest way is to ferry or fly to Milos and then make your way to Pollonia where there is a small car ferry that connects the two islands. Check timetables here.

Many people visit Kimilos as a day trip from Milos either on their own or part of a 3-island boat trip which are excellent.

Further reading : Things to do on Milos 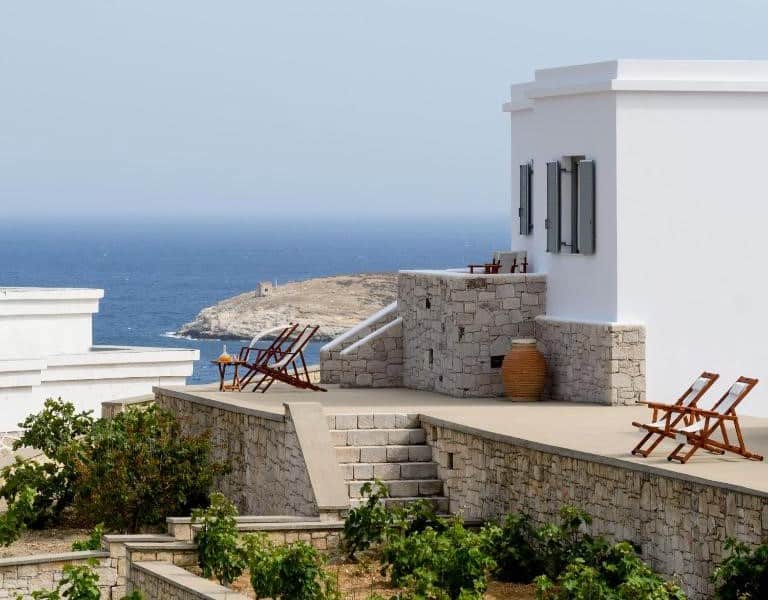 The main town of the island is Chorio village which is slightly inland from the Port.

Chorio is a traditional Greek Island village with beautiful Cycladic architecture and medieval influences. It is small but quaint and there are a number of lovely shops and cafes that have been rejuvenated in recent years and are picture-perfect.

If you want to stay in Chorio then you can’t go past Kimolos Houses which are two lovely little self-contained holiday homes that can sleep up to 5 people. They are beautifully appointed and have amazing views over the island and out to sea. You can also stay in a converted windmill!

If you want to stay right at the port then Psathi Blue Beta is your best option.

Right near some of the best beaches is Thalasea Kimolos which also has a big swimming pool and is close to a bus stop. Sardis Rooms nearby is also good budget option and it’s also possible to walk into Chorio from both of them which takes about 30 minutes.

Alternatively you can stay on Milos and visit Kimilos as a day trip. 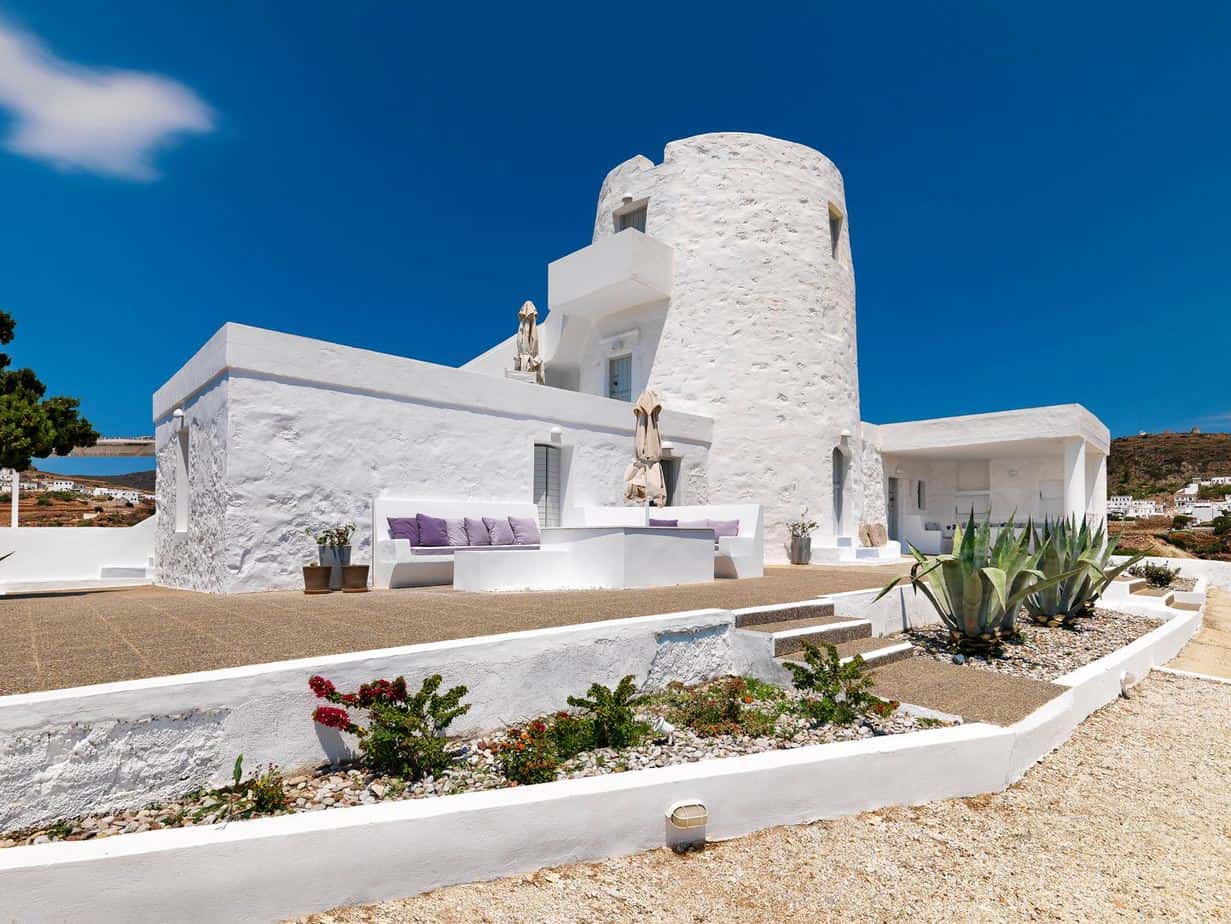 Things to do on Kimolos

Like many Greek Islands Kimolos is all about kicking back, relaxing and enjoying the sea and the local hospitality. There are some great beaches here and its lack of tourists and widespread commercialism is a big part of the appeal of staying on Kimolos Island.

The highlights of Kimolos are:

Aliki Beach is fairly close to Chorio and is one of the more popular beaches with a long sandy stretch of calm, crystal clear water. There is a good taverna, Sardis, and a few places to stay such as Giannis Studios.

Bonatsa Beach is the next one along and is one of the more popular beaches with the southern aspect keeping it well protected from the Meltemi wind and a couple of good places to stay, like Bonatsa Beach House, right on the beach.

Kalamitsi Beach is the next one heading west and also has a couple of tavernas a short walk from the beach.

Psathi Beach is the most popular on the island and is right next to the port with a number of fisherman huts, cafes and quaint rooms to rent and a great hotel, Psathi Blue.

To the north of Pasthi, you will find Rema, Elephant and Karras Beaches all in a row. These small beaches are protected by rocky coves and are great for snorkelling.

Klima Beach is also popular as is Agios (Saint) George in the northeast of the island. This beach has very white sand and is quite protected making it one of the nicest in the Cyclades.

On the western side of the island are Paralia Dekas, Ellinika, Mavrospilia and Lakos. These all get wonderful sunsets of course and Elliniki has the stunning white rock that you can find at Sarakiniko on Milos.

Along the north of the island are Paralia Vromou, Monastiria and Soufi Beaches but you really need a 4×4 vehicle to access these.

TIP: While there is a good bus service around much of the island it can obviously pay to hire a car to explore some of the beaches that aren’t serviced.

Monuments and Museums on Kimolos

There are more than 100 churches on the island, many of which are Byzantine monuments. The Kimolians have built and preserved these churches and are understandably very proud of them.

This wonderful church is one of the first buildings that you’ll see when arriving at the port of Psathi. It was built in 1874 and was a community project completed by all the residents of the island.

The remains of the Kastro are part of the old village.

Most of the houses of the outer castle have been saved which you can see inside the Brachera, a coffee shop that forms part of the castle’s outer wall.

You can also walk around what remains of the inside of the castle and the door is permanently open. Inside the West Gate you will find the oldest and most beautiful church on the island, the Genesis of Christ, built in 1592. It, and the entire castle, are wonderful examples of Byzantine monuments.

The Archaeological Museum of Kimolos

The Archaeological Museum of Kimolos is housed in a traditional two-storey residence opposite the Kastro and the Metropolitan Church of Panagia Odigitria.

It is home to a number of relics from the excavations in the Ellinika area, and other things found across the island.

The Folklore and Maritime Museum was founded by physician Manolis A. Christoulakis and is housed in his father’s house in Kastro. His collection of authentic objects used by the Kimolians in their everyday life is rare and very interesting to see.

He has curated a number of agricultural, dairy, woodworking, fishing and doctor’s tools as well as furnishings from old houses, including household utensils, clothing and traditional costumes.

Polyegos is the largest uninhabited island in the Mediterranean and is home to huge colonies of monk seals and sea turtles.

The island can be explored by boat and there are some magnificent sea caves and stunning blue water to swim in. This can be done from Kimolos or as part of a 3-islands tour from Milos.

“Skiadi” in the local dialect means ‘hat’ and this mushroom-like volcanic stone has taken that shape over tens of thousands of years of erosion.

Skiadi is located in the northwest of the island with a wonderful view of the west coast of Kimolos and Milos.

It is best to explore last in the afternoon when you can also enjoy the stunning sunset, perhaps after an afternoon at the beach.

There are the remains of an ancient city submerged under the sea about 100 metres from the beach.

This city existed during the Mycenaean era and was destroyed by an earthquake, likely the same one that saw the collapse of the entire civilization. Take your snorkelling gear.

You can also see the remains of some ancient tombs in the hills above the beach.

You can go to Xaplovouni from four different neighbourhoods of Chorio. Choose the path from Myzithrou so that you can also visit the Byzantine chapel of Pantokratoras with the panoramic view. The windmills are mostly in disrepair and are remnants of days gone by.

It is also possible to stay in a Windmill with the beautiful conversion of The Windmill-Kimolos.

In Kimolos “Magazia” are caves of white volcanic rocks that are used for the preservation of boats during the winter months.

You will see these distinctive caves with their brightly coloured doors at various places around the coastline with the most picturesque areas in Rema, Goupa and Karras.

On August 15th each year the Assumption of the Virgin Mary is celebrated across the country and is one of the most important dates of the Greek calender.

On October 4 and 5 the Festival of Saint Methodia is celebrated by the all the residents and the Municipality of Kimolos.

On November 21 the Entrance of Theotokos celebrates the patron saint of the island, Panagia Odigitria.

On June 25-30 the Kimolos International Film Festival (KIFF) is held which includes an open-air cinema. 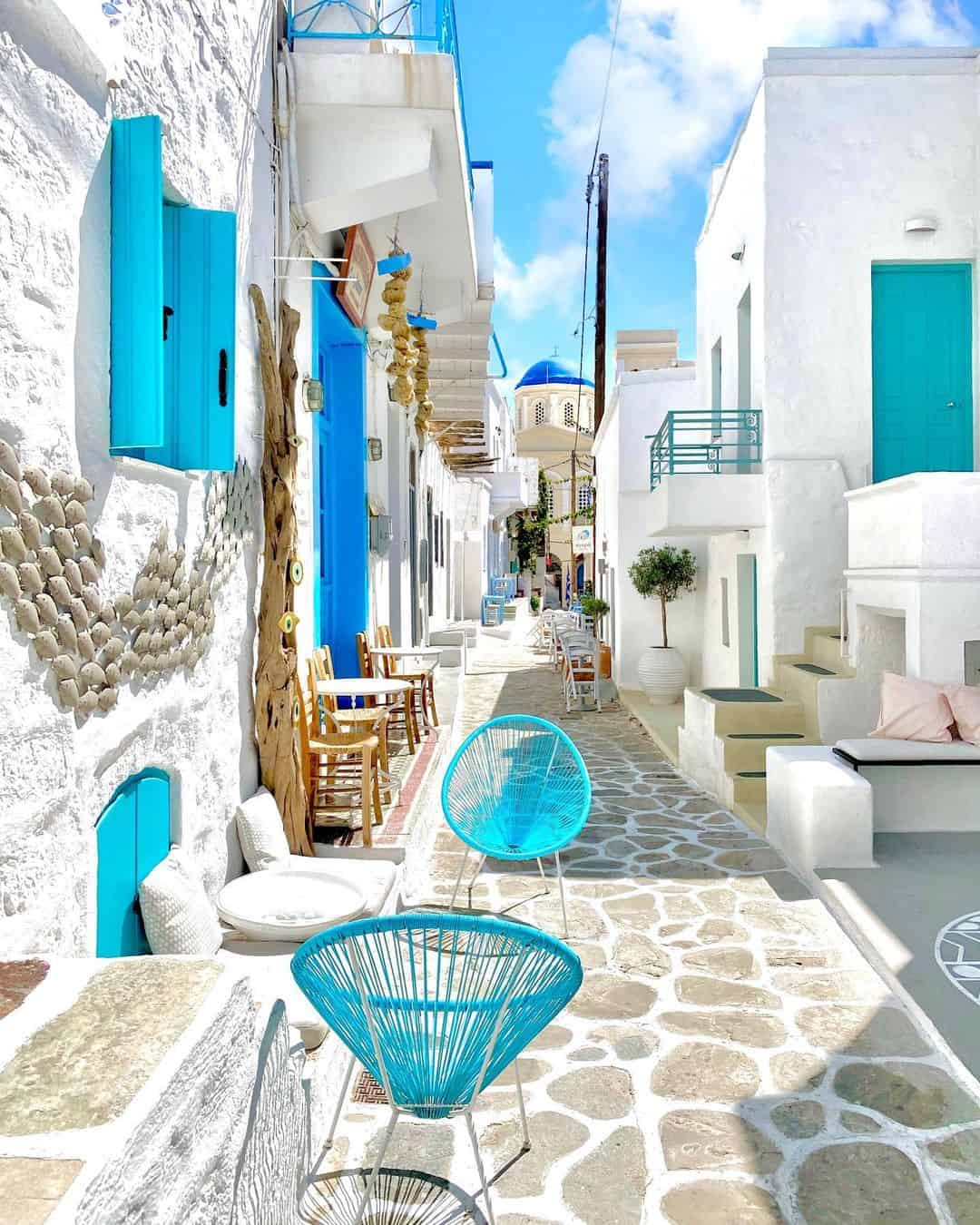 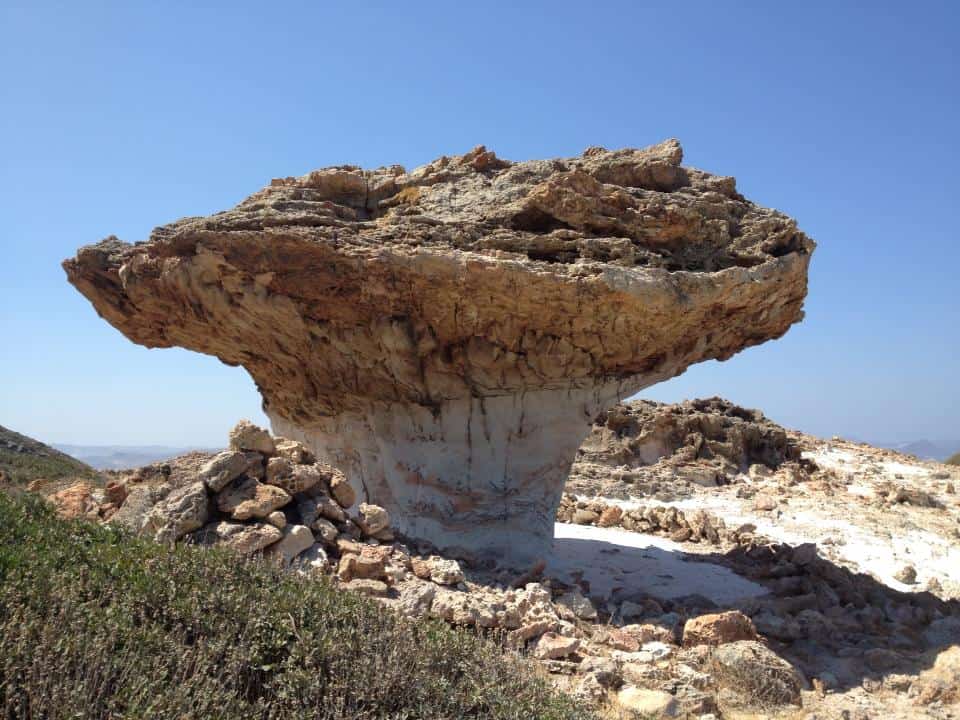 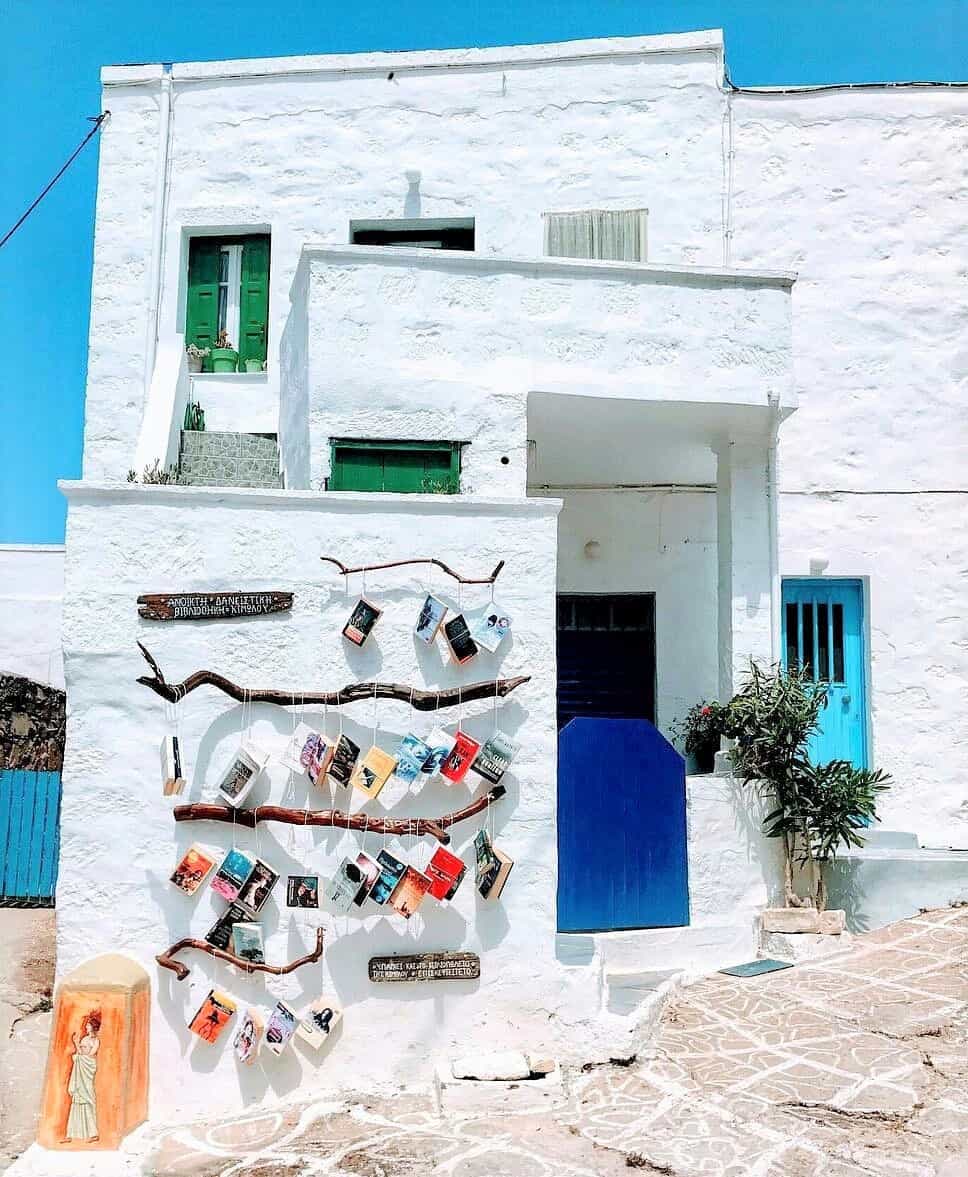 Where to eat on Kimolos

There are not a lot of Tavernas and Cafes on Kimolos but what is there is excellent!

At Psathi, right next to the port is Postali, which is one of the largest, has great food and is a wonderful place to watch the boats come and go. All the food is fresh, homemade and delicious. Seafood is king but don’t forget the chocolate pie!

Other places in Psathi to try are The Wave and To Kyma.

In Chorio, Meltemi offers up excellent traditional food with views across the island while Kali Kardia ‘Bohoris’ is a quaint, traditional taverna on the main road towards the back of the town. It is cheap and cheerful and they serve local specialities such as goat and meatballs. This is where you will find a lot of locals.

Close to Bohoris you will find Posto which is great for a quick lunch, especially Gyros.

Along the walls of the Castle in Chorio you will also find several excellent places such as To Iaikon, Brachera, Palaia Agora Grill and bars like Stavento and Kyklades.

If you’re out and about exploring the island and its beaches make time to stop in at Prasonisi just before Agios Georgios Beach or Ammos Beach Bar behind Kalamitsi Beach. 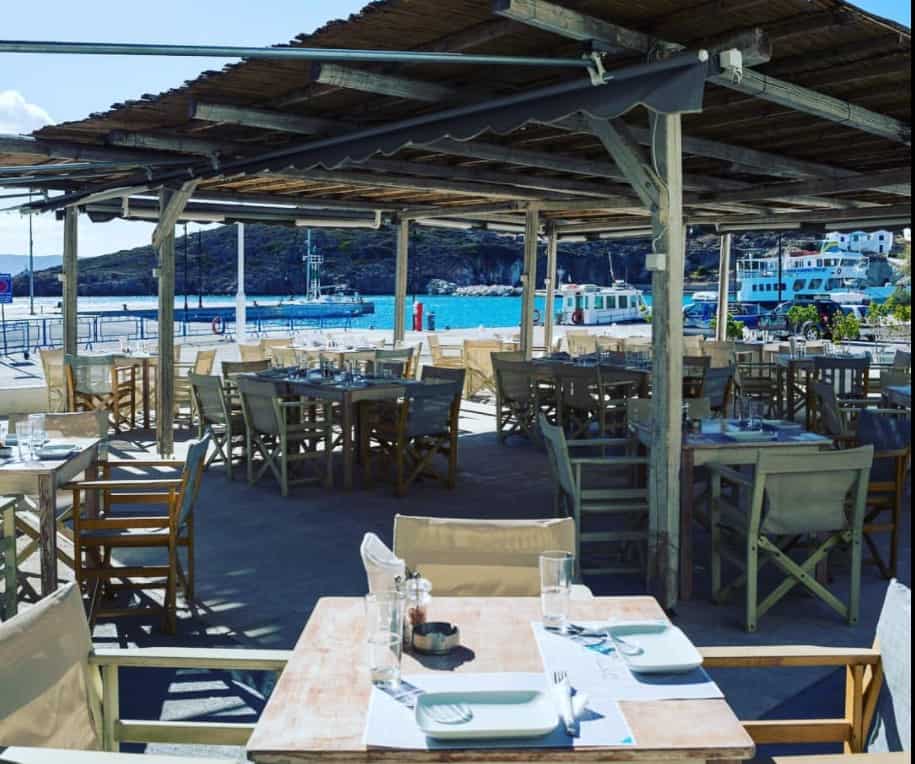 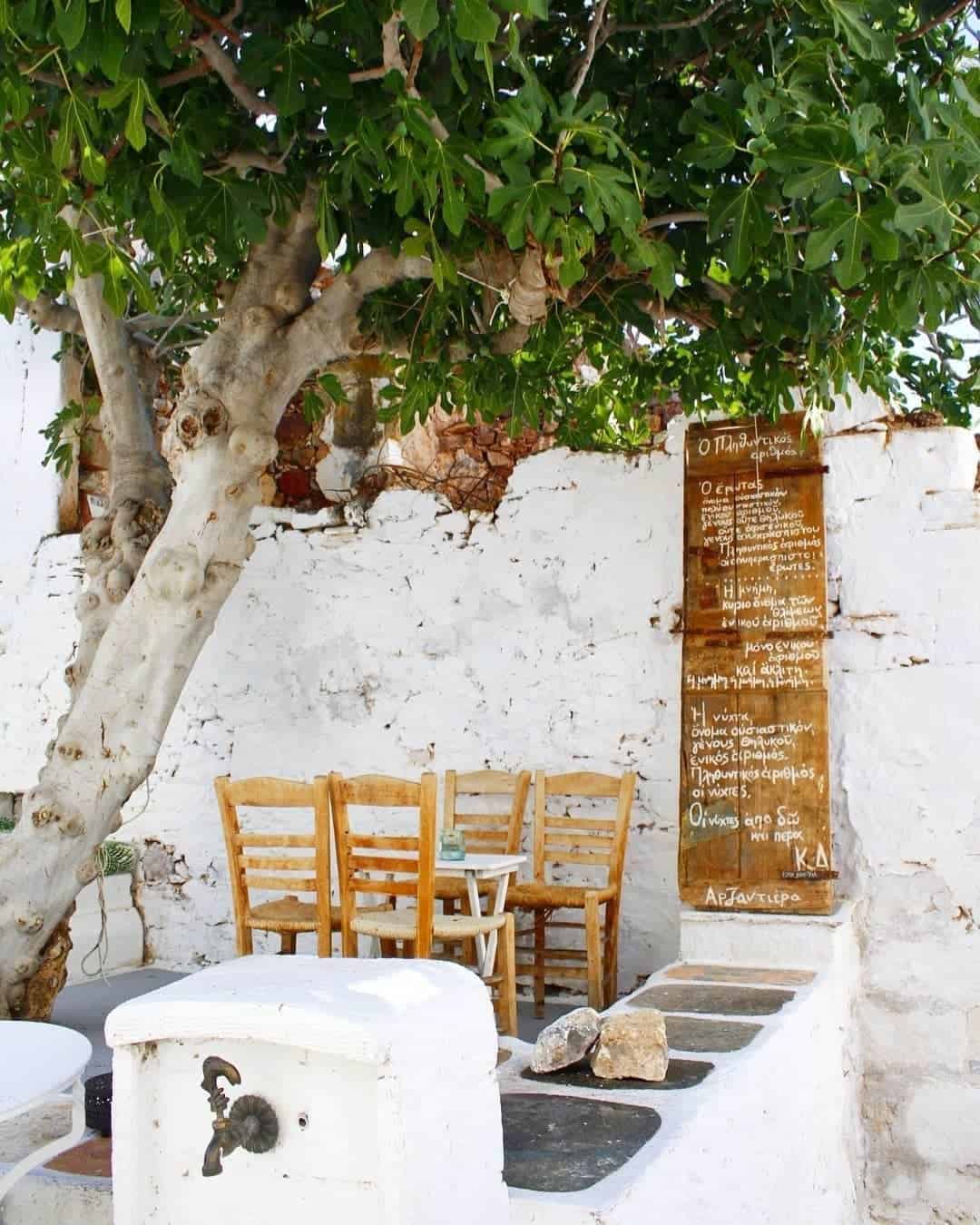 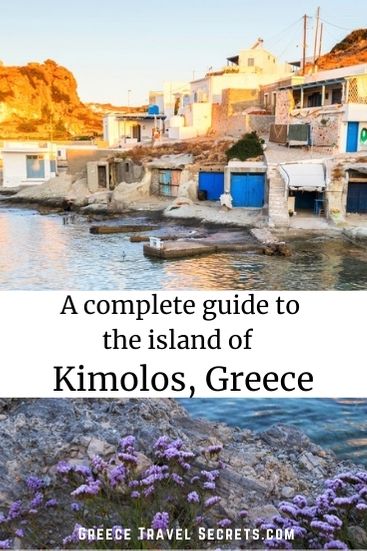