WHAT IS THE MELTEMI WIND IN GREECE? 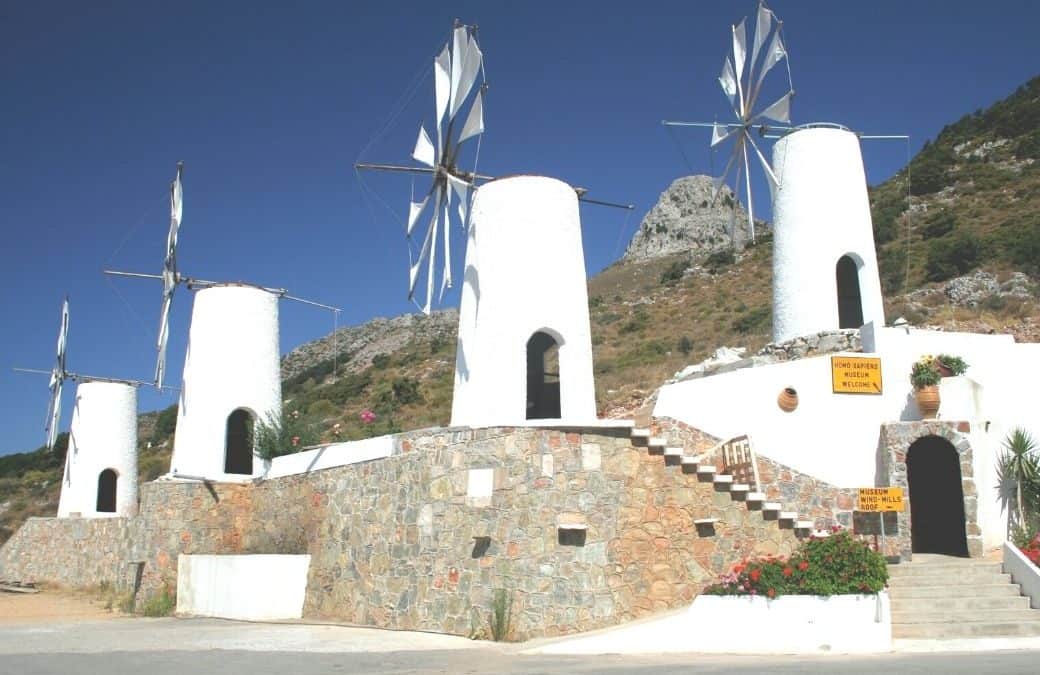 This wind polarises many people with locals often welcoming it while tourists may despair.

It’s handy to understand what it is and where it affects to make sure your vacation plans don’t go awry and you still have a fabulous trip to Greece.

Further reading: When to visit Greece 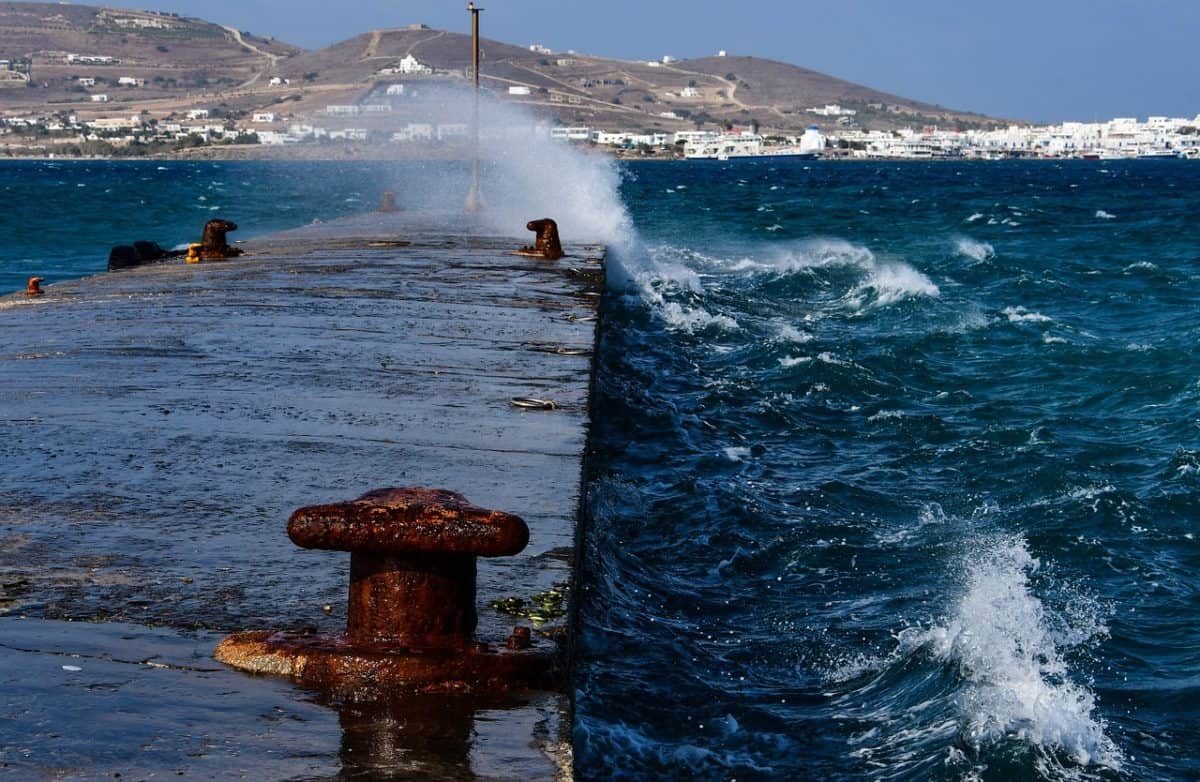 What is the Meltemi wind?

Also known as the Etesians or Meltem these are very strong winds that come down from the Bosphorus across much of the Aegean sea and across many of the Greek Islands.

The word ‘Etesian’ is from the Greek word ‘etos’ (year) describing the annual onset of these winds. Its modern name ‘Meltemi’ probably derives from the Italian phrase ‘mal tempo’ or ‘bad weather’. The Mediterranean climate is sometimes called an Etesian climate.

The wind tends to be strongest in the afternoons and often dies down at night but it can sometimes last for several days at a time.

They can start with little or no warning and disrupt the public ferries, sailing boats and even cruise ships depending on the strength.

Known as a ‘katabatic wind’ ( a drainage wind) it can bring about harsh sailing conditions but also provides cooler temperatures, low humidity and good visibility. When do the Meltemi winds occur?

The Meltemi can occur anytime between May and October but is most frequent in summer, June through  September. Its maximum strength and duration is during July and August.

As stated it may blow for a single day or up to a week, although usually, 1 to 2 days is most common.

Where does it affect?

Depending on where in Greece you are the Meltemi winds will come from the north, north-east, or north-west.

As they start in east Asia and come down the Bosphorus in Turkey it first hits the Northern Aegean Islands, the Sporades , parts of the Dodecannese and the western side of Evia Island but the full brunt is usually then the Western Cyclades that lay directly in its path. Tinos, Andros and Mykonos are especially affected. You may have seen the iconic windmills on Mykonos and this is your first clue, in fact, any island with a lot of windmills or windfarms is a dead giveaway.

The wind usually heads on through the Cycladic islands of Paros, Naxos, Amorgos and Ios and even Santorini. It can reach Crete but has usually lost some velocity by then.

The Western Mainland and the Ionians Islands are largely unaffected as are the Sporades Islands near Athens. This is due to the soaring mountain ranges protecting them. These areas, however, can have their own weather events at times.

How strong is the Meltemi?

The wind usually starts in the early afternoon at around 4 – 5 Beaufort (11 – 21 knots) and dies out at sunset. However, sometimes it can reach 5 – 7 Beaufort (17 – 33 knots) during the day and last right through the night on into subsequent days. There have been times when it is 8-10 Beaufort and this is when the ferries are cancelled.

Believe it or not, this wind can offer welcome relief on a hot summers day when temperatures in and around Athens can be a lot worse.

How to tell if the Meltemi is coming

Experienced Sailors are good at predicting when the Meltemi is coming, although most of us will have to rely on the weather reports.

It’s believed a drop in humidity, small altocumulus clouds the day before and improved visibility are all strong signs.

Problems caused by the Meltemi

The biggest issue the Meltemi causes is disruption to the ferries and marine traffic.

The smaller fast ferries are the first to cancel and the bigger ferries only usually do so in the strongest winds.

Travelling between Santorini and islands like Folegandros, Milos, Ios, Paros and Naxos is usually always still possible. Travelling from the Cyclades by ferry back to Athens can be the biggest challenge.

Even if the ferries can still handle the sea it is docking that can be their biggest issue particularly in smaller ports. If you are boarding a ferry on a very windy day be sure to take some seasickness medication first.

Windy days also mean excursions on boats are postponed or diverted – ie. a sailing trip to Antiparos from Paros may go to the Small Cyclades instead or vice-versa. Be prepared to be flexible.

Obviously windy days are also not good beach weather but the trick is to head to protected beaches, often in the southern (leeward) parts of islands and the Mainland. The Athenian Riviera is a great option. 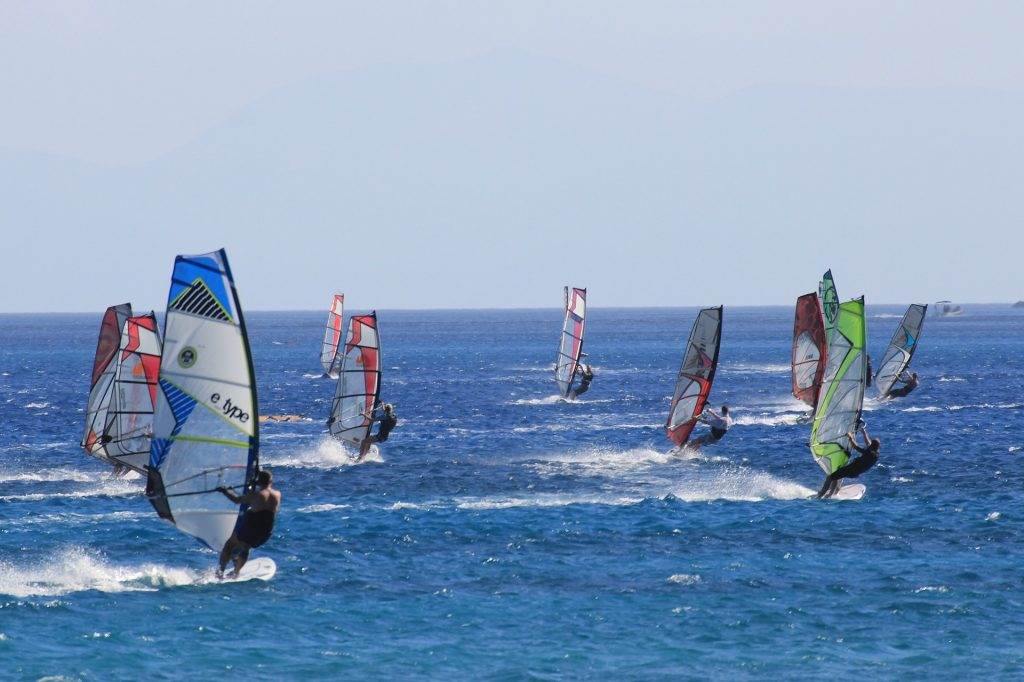 Things to do on windy days in the Greek Islands

There is always plenty to do in Greece during inclement weather whether it’s wind, rain or something else.

Many people are thrilled when the wind picks up – windsurfers and kite surfers in particular. Paros hosts the International Windsurfing Championships each year and these sports are fun to watch at any time even if you aren’t a participant.

There are plenty of indoor activities too.

Shopping is still possible. The narrow, winding alleys in the Chora/Old Towns are like that for two reasons; one, to allude hostile invaders and two, to prevent wind tunnels, which modern grid-like town planning fails so badly at. You will also find protected cafes, bars and tavernas in these back streets as well as galleries, museums and other specialty stores.

On Santorini, there are a number of great museums. The Akrotiri Archeology site is largely indoors and there is the Wine Museum as well. The 3D Atlantis experience is a fun activity to do indoors and is especially popular with kids.

Another great indoor activity in Greece is a cooking class. You can find them all over Greece but the ones in Santorini, Athens and Naxos are especially popular ( see links below).

Wind in other parts of Greece

The Ionian Islands in the west of Greece are not affected by these Etesian winds but experience a reliable Maistro wind throughout the sailing season.

Medicanes are tropical-like cyclones and are rare in Greece but are increasing. In 2020 there was a very bad Medicane that hit the Ionians islands, particularly the northern part of Kefalonia.

These Mediterranean hurricanes can affect the Adriatic Ocean right up to Croatia and the Ionian Islands in Greece but rarely affect other parts of Greece. They typically occur between September and January.

The Meltemi in Mythlogy and History

In Greek Mythology the Meltemi were believed to be under the control of Boreas, the purple-winged god of the North Winds and Winter, who lived in Thrace in Northern Greece. The winds were much feared in Ancient times and sailors would proceed slowly from headland to headland, pulling ashore each night.

In Modern History the winds have also played a role. It is believed that Philip of Macedon, the father of Alexander the Great, used his knowledge of the winds to run his naval operations, helping him to assure victory over many opponents by hiding behind the oncoming wind or using it to powers his fleet home.

HOW TO GET AROUND MYKONOS 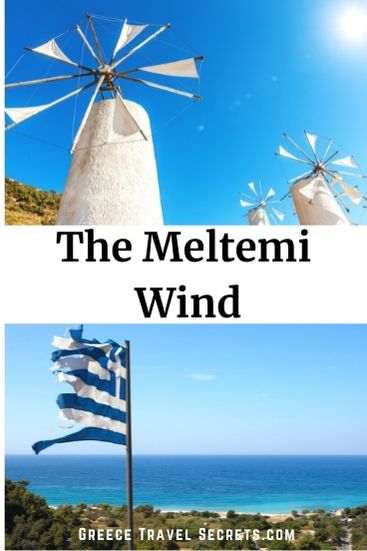